Difference between Algae and Fungi

Algae, or singular: alga, are a group of simple, typically autotrophic organisms, ranging from unicellular to multicellular forms. Algae belong to the Eukaryota domain and the Protista kingdom. Similar to all eukaryotic organisms, they have a nucleus enclosed within a membrane and plastids bound in one or more membranes. Algae constitute a paraphyletic and polyphyletic group, as they do not include all the descendants of the last universal ancestor nor do they all descend from a common algal ancestor. The term ‘Alga’ is the Latin word for ‘seaweed’, which retains its meaning in English.

Algae are most commonly found in aquatic bodies, though few also survive on rocks or hard substances in humid places. They are said to be related to the plants, and contain chlorophyll, though they lack roots and stems. Algae can grow from microscopic size to over 100 feet in length, depending on the type. They can also reproduce in many ways from simple asexual cell division to complex forms of sexual reproduction. Algae are classified into six phyta, mainly, Crysophyta, Euglenophyta, Pyrrophyta, Chlorophyta, Phaeophyta and Rhodophyta. It is believed that the first plants on earth originated from freshwater algae, such as Chara. Some species of algae can form a symbiotic relationship with other organisms, where they provide organic substances. Lichens, coral reefs and sea sponges are a few of these organisms that receive nutrients from algae. Edible forms of algae include seaweeds. 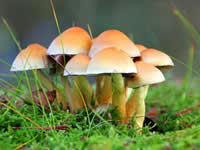 Fungi are a group of unicellular or multinucleate organisms that live and grow on decomposed matter. They are also a member of the Eukaryota domain, while belong to the Fungi kingdom. They also include microorganisms such as molds and yeast. The kingdom Fungi differ from plants, in that unlike the cell walls of plants, which contain cellulose, fungal cell walls that contain chitin. The term fungi, singular: fungus; is adopted from the Latin word, ‘fungus’ meaning ‘mushroom’. The origin of this word is derived from the Greek word, Greek word ‘Sphongos’ meaning, ‘sponge’. Fungi can reproduce by various asexual and sexual methods.

Before Fungi was divided into its own kingdom, it was considered similar to plants as they have similar lifestyle; both are immobile, both grow in soil, and both have similarities in general morphology and growth habitat. Fungi are considered both symbiotic and parasitic in nature, where they thrive on other living objects. Fungi most commonly survive on other carbon based life-forms, such as plants, animals, insects and humans. They are also able to decompose organic matter, and take needed nutrients from the organic substance. They convert organic into inorganic material and play a fundamental role in nutrient cycling and exchange. Fungi are also used as food for humans. Edible fungi include yeast, mushrooms and truffles. They are also in production of antibiotics, detergents and pesticides. Many mushrooms are also poisonous in nature. There are also rare mushrooms, called as magic mushrooms, which have psychedelic properties and are used as recreational drugs.

Maybe now I can say more than that organic stuff on the side of the house. Thanks

its help me on my project

This is obviousely informative enough and explanatory.Cryptgams are extremely diverse and the best way to know them with ease is to have a good method of approaching this complex taxonomically of plant.I like to study them but having gotten an approach and i think the best and first approach in studying this wonders is to know the similarities and differences that exist among the various groups of unicellular and multicellular range of non flowerless plants.With the similarities and differences stated here think it serves as a good exposure to understanding the concept lying behing this simple especially as one moves from the state of unknown to known thanks