Difference between Samsung Galaxy S6 Edge and S6 Edge Plus

Key Difference:Samsung Galaxy S6 Edge Plus shares much of the same features as the original Edge, but offers a bigger screen, try 5.7 inch huge compared to the 5.1 offered on the Edge. 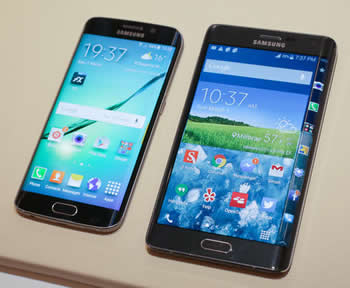 In an attempt to stand out from its previous phones and make a mark in the high-end smartphone segment, Samsung introduced its Galaxy S6 Edge in April 2015. The phone differs from the company’s other flagship phones because of its curved display that spills over the edges. The Galaxy S6 Edge was a huge hit with Samsung lovers and even managed to acclaim positive points by the critics.

Now, to outdo itself and to compete with Apple’s upcoming phone – no word on that yet – the company has introduced the Galaxy S6 Edge Plus or S6 Edge+.  The phone shares much of the same features as the original Edge, but offers a bigger screen, try 5.7 inch huge compared to the 5.1 offered on the Edge.

Under the hood, both the phones run on the Samsung Exynos 7420 processor and comes with an octo-core processor with four cores clocked at 2.1GHz and another four at 1.5GHz. The phones also come with the same cameras (front and back) and even the same camera features.

So, what’s different other than the size? Well, the bigger size also attributes to bigger dimensions, but it is made slightly and we mean slightly thinner at 6.9mm compared to the 7mm of the Edge. The Edge+ also weights more at 153 g, compared to the 132 g of the Edge. The Edge+ also loses the infrared port and the microphone is in a different position, shifted from the right side of the bottom edge to slightly on the left. 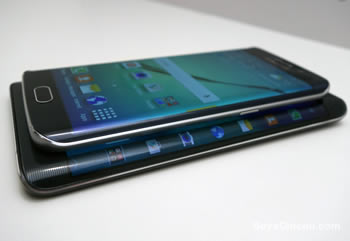 The company has also dropped the 128 GB option in the Edge+, so it is available only in the 32 and 64 GB options. As previously mention, no infrared port and the RAM has been boosted from a 3 GB to a 4 GB.The battery has also be upped from 2600 mAh available on the Edge to 3000 mAh, but retains its non-removable feature. The company has also incorporated fast charging to the wireless charging, resulting in faster charges.

In terms of applications, the Edge had offered a few new cool features. ‘Information Stream’, ‘Night Clock’, ‘Edge Lighting’ and ‘People Edge’. Information stream allows users to scroll information on the edge of the phone. Night clock works similarly but instead of information such as battery and missed calls, it shows the time. Edge Lighting is slightly different – in this the phone will light up with a specific color when it is placed down and someone is calling. The user will have to assign a color to the caller, and when the caller calls the phone will edge will light up with that particular color. However, for this to work the phone must be placed face down on a surface. People’s Edge is a swiping feature that allows users to pull in their Favorites or most called people by swiping from the top right side.

In the Edge+, in addition to those features, an additional function has been added, known as ‘Apps Edge’. This works similar to the People Edge, but instead of favorite contacts, it shows five favorite applications when swiped on the shortcut tab. Also the shortcut tab is no longer limited to the home screen (where the person could only swipe on the lock screen or home screen) — it can now be set up so that it shows up no matter where one swipes in the software.

Comparison between Samsung Galaxy S6 Edge and S6 Edge Plus:

Overlooked in article, but the Edge + can take and save pictures in RAW format. Currently, the regular Edge cannot.