Difference between Temperature and Heat

Key Difference: Temperature is the measurement of the average kinetic energy of the particles of an object. It measures the degree of hotness or coldness. On the other hand, heat is basically the energy transfer between objects due to the temperature variation. It flows from the high temperature location to low temperature location.

In day-to-day life, one considers that temperature and heat are the same. However, they are different from each other but still related to each other. To understand the association of heat and temperature, one must be familiar with the kinetic energy possessed by an object.

It was first observed by Count Rumford that on a drilling a hole in cannon barrel heat was produced. It was due to motion that takes place in a object. Whenever, a force acts on a body, and makes it move, work is being done. This energy of motion is known as kinetic energy. 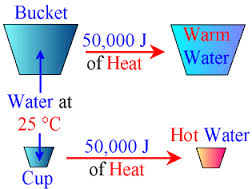 Heat is basically the energy which is transferred between objects due to the temperature variation.  Temperature is used as a measurement factor for attributes of warm and cold. Heat is related to the temperature as it always flows from hotter to colder objects. Heat is not energy but  is a measurement of energy transfer. For example, when a hot water bottle is pressed against the body, it transfers the hotness into the body. It is different from temperature, as unlike temperature it is dependent on the mass of the substance. For example, 30 grams of water at 70 degree centigrade will possess more heat energy then 25 grams of water at 70 degree centigrade.

Heat can also be described as the amount of thermal energy contained in an object. The measurement of heat is done in joules or J. A Joule is a Newton times a meter. If this heat is provided to an object it tends to increase the temperature of that matter. Heat can be transferred by three mediums – conduction, radiation and convection.

Comparison between Temperature and Heat: