Difference between A4 and A6 Paper Size

Key difference: The ISO 'A' series of sheet sizes are based on a constant width to length ratio of 1: square root of 2 (value approximately= 1.4142). A4 is the size of a standard business letter, whereas A6 is one quarter (1/4) the size of A4.

In the 1920's, Dr. Porstmann of Germany published a document proposing a standard for paper. His theory quickly became DIN approved, which is a standard in Germany meaning ‘Deutsches Institut Fur Normung’. 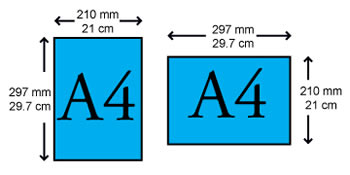 In English, DIN translates as 'German Institute for Standardization'. It is the international paper size standard, ISO 216. Accordingly, the papers have categorized in A-series, B-series and C-series. The paper sizes are all based on the single aspect ratio of 1: √ 2 (square root of 2). This ratio is particularly important for reduction onto microfilm, or reduction and enlargement on the photocopiers. All metric equipments including microfilm cameras, microfilm printers, photocopiers, and even drawing pen sizes are designed around this ratio. This makes the process of archiving drawings, resizing, and modifying drawings easier.

A4 size paper became a standard in the late 1970's. However, even though the standards were introduced in the early 20th century, it took more than 50 years for the standard to be recognized worldwide. Among all the formats, A4 is clearly the most important one for daily office use. The A4 size has become the standard business letter size in English speaking countries such as Australia, New Zealand and the UK, that formerly used British Imperial sizes. Many South American countries such as Mexico, Costa Rica, Chile, Venezuela and more, have also officially taken A4 paper as standard paper.

The A6 is used for small brochures, programs or flyers. It is always printed by professionals, who print in large sheets before cutting them. The A6 corresponds to half of A5, and quarter of A4 paper size. However, it takes two A7 sheets and four A8 sheets to form an A6.

Comparison between A4 and A6 paper size: