This is an energy burning techniques. In aerobic glyolysis, the glucose is metabolized to form

ATP (Adenosine Triphosphate). At first, glucose is converted to lactate anaerobically that is, without oxygen.

The lactate obtained is burnt by the body using oxygen to produce ATP.

Than aerobically the reaction takes place as:

It is one such step among the cellular aerobic respiration. The simple meaning of aerobic glycolysis is the “need of oxygen to breakdown the glucose elements”. The ATP molecules are produced along with pyruvate acids. Furthermore, pyruvate acid molecules are oxidized to form more ATP molecules. Aerobic glycolysis is useful for moderate rates of energy output and for moderate time periods such as, running for a 2 mile race. 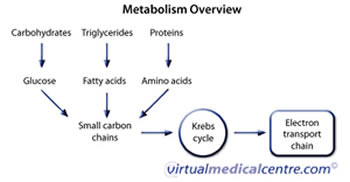 Aerobic lipolysis is one of the energy processes, in which the fat are burnt in the Kreb cycle process. Here the triglycerides have to be broken into fatty acids which are bound to proteins.

The reaction of aerobic lipolysis is:

In this, the fat is burnt out during exercises. The lipid metabolism is the main way, where glycogen stores get replenished after exercise. Workout is specially carried out with the empty stomach. It is one such energy obtaining method, where there is degradation of fat to obtain the ATP molecules. It is also one of the primary methods, where the ATP is obtained from ADP.