Key Difference: The Chevrolet Spark and the Kia Picanto are a couple of smartly designed city cars that rival each other in the hatchback car section. These cars differ in terms of their appearance, make, engine capacity, performance, etc. 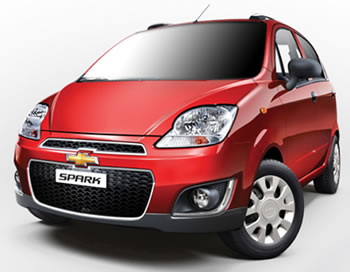 The Chevrolet Spark can be understood as the gradient of Daewoo Matiz, which was produced by Daewoo Motors until its take over by General Motors, the American car maker. The take over took place in the year 2002, since when General Motors has been producing and selling the Daewoo Matiz under its own brand name 'Chevrolet Spark'. The car has been sold through its three generations, the last of which was launched in the year 2010. Comprising of the typical five door hatchback style, the spark is sold across the world by different names such as the Matiz Creative in South Korea, Chevrolet Beat in India, Holden Barina Spark in Australia, etc. The car is not exactly loaded with features, but does enough to serve a family of four adequately. Sporting a funky and fluidic design, the spark packs in a powerful engine with an impressive displacement capacity of 995 cc. Largely available as a petrol run vehicle, the Chevrolet Spark has also been presented in its diesel variant in some select countries of the world. With a healthy fuel tank capacity of 38 liters, the Spark is almost the perfect hatchback for a pleasant weekend outing. However, the car surprisingly falls short in the fuel economy department, with a meager mileage capacity of 21 kmpl. Nevertheless, the Chevrolet Spark still manages to score big on style, and is reasonably potent in performance. 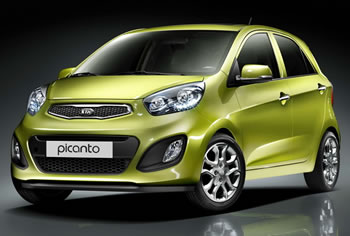 The Kia Picanto is a five door hatchback car produced by the South Korean car manufacturer, Kia Motors. The car has been sold through two generations, since its production kicked off in the year 2004. The car is known and sold by different names around the world, such as the Kia EuroStar in Taiwan, the Naza Picanto in Malaysia, the Kia Morning in South Korea, Hong Kong and Chile, etc. Kia Motors have their manufacturing plant established in Seosan, South Korea, in collaboration with the local automotive parts manufacturer; Donghee Industrial Co. Ltd. Impressively enough, the car has undergone only two upgrades since its first roll out from the Seosan plant. The Kia Picanto looks effortless in style and comfort, thanks to its urbane design. The car is provisioned with Epsilon engines in some of the models, and Kappa engines in the others. However, both variants of engines are allowed a 5-speed manual and a 4-speed automatic transmission system. Apart from its fairly robust engine, the Picanto comes along with a multitude of standard conventional features as well. Some of these include, front and patented rear electric windows, remote central locking, electric mirrors, air conditioning, etc. Besides these, the Picanto also promises some other fancy features such as an LED daytime running light system, digital speedometer, touchscreen multimedia stereo system, handbrake alarm, height adjustable seat belts, etc. To conclude, it’s not at all a foregone conclusion to say that the Kia Picanto will give its competitors a good run for their money.