Difference between AGP and PCI Express

Key Difference: AGP was introduced to cater the increasing demands of 3D video cards. PCI Express is a modification of the standard PCI bus. PCI Express has the advantages of speed and versatility over AGP. PCI Express has replaced AGP as a video interface. They also differ in some of the physical characteristics. 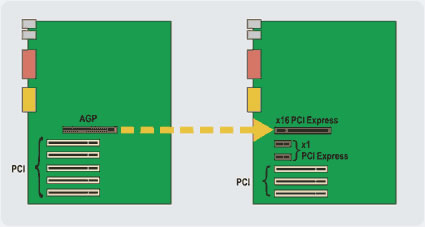 AGP stands for Accelerated Graphics Port. It is an interface specification that has been designed especially for the 3-D graphics; focusing on a faster and smoother display. This specification has been developed by the Intel. It can be described as a high speed point to point channel that is used to attach a video card to a computer’s motherboard. It offers a channel which is fully dedicated to graphic adapters.

AGP has been quiet successful in outshining PCI. It is characterized by a dedicated pathway between a slot and a processor. Due to this direct connection, higher clock speeds are attained. It proves its efficiency by employing –

PCI Express (PCIe, PCI Express stands for Peripheral Component Interconnect Express) is a relatively new standard for connecting devices to computers. It can be considered as an upgraded version of PCI as it is capable of providing higher potential bandwidth than PCI or even more than AGP. Like PCI, the specifications of PCIe are looked after by the PCI-SIG. This high speed hardware interface got introduced in 2002. It works on a switched architecture by using serial communications channel which provide a 250 MB/sec (PCIe 1.0), 500 MB/sec (PCIe 2.0) and 1 GB/sec (PCle3.0). Its advanced capabilities include CRC based data integrity, hot plugging and error logging.

Internal architecture of PCIe can be compared with a local area network where each link is connected to the central hub. This central hub works like a network line switch. It has replaced the conventional PCI, PCI-X and AGP bus. Its electrical interface is also used in other types of standards like ExpressCard which is a laptop expansion card interface. A system board must have a PCI-E slot in order to use this technology.

PCI Express cards were designed to replace AGP. Thus, the technology varies as well as the physical attributes. In addition to other features, PCI Express is also available in different formats: x1, x2, x4, x8, x16 and x32.

Comparison between AGP and PCI Express: