Difference between Alot, Allot and A Lot

Key Difference: The word ‘alot’ technically does not exist in the English language. It is a misspelling of ‘a lot.’ The term ‘a lot’ means a large number, a large amount, or a great deal. “Allot” means to give something to someone, or rather to assign something to someone.

The terms ‘Alot, Allot and A Lot’ are often confused together. However, what people don’t realize is that they are three different terms than have three different implications. English can be a complicated language, which is why three words that look so remarkably similar can be completely different in their usage and meaning.

It is hard to believe, especially due to its frequent usage but the word ‘alot’ technically does not exist in the English language. It is a misspelling of ‘a lot.’ It is intended to mean the same thing, however it does not actually exist. The word is not even present in any dictionaries, though due to its frequent usage the term in now commonly accepted in an informal usage; the argument being that if the reader and writer understand the context of the word and the meaning is conveyed then the purpose of the word is fulfilled. However, the purists do not accept the word as real. 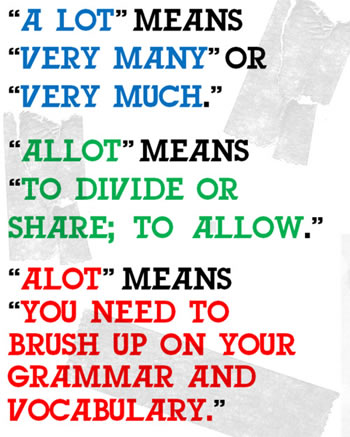 The term ‘a lot’ and informally ‘alot’ have a simple meaning. They mean a large number, a large amount, or a great deal. For example: She has a lot of book. The sentence is saying that she has many books, a large number of books. Another example would be: He talks a lot. Here, it means that he talks a great deal, probably more than he needs to.

The other term “allot” which is often confused with the two has a completely different meaning. “Allot” means to give something to someone, or rather to assign something to someone. Dictionary.com defines “allot” as to “divide or distribute by share or portion” and to “distribute or parcel out”. For example: We allot them only an hour for each segment. Here the indication being that they are given or allowed only one hour for each segment.

So, in summary, ‘alot’ is a no, ‘a lot’ is too much, and ‘allot’ is to give or assign. Think of it this way, double ss equals to double ll, hence, allot means to assign; whereas a lot is a LOT, i.e. too much.

Comparison between Alot, Allot and A Lot: