Difference between Antivirus and Firewall Software

Key Difference: Antivirus or anti-virus software is a software that is used to prevent viruses from entering the computer system and infecting files. Many antivirus programs these days also eliminate different kinds of malware in addition to viruses. Firewall software is a software that controls the incoming and outgoing network traffic by analyzing the number of data packets that is sent. Firewall is a hardware based network security system that works based on a rule set. It works to protect between private and public networks. 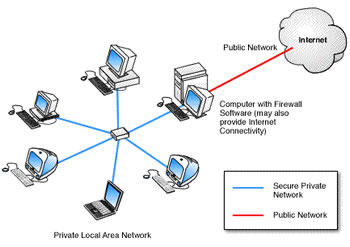 Firewall software is a software that controls the incoming and outgoing network traffic by analyzing the number of data packets that is sent. Firewall is a hardware based network security system that works based on a rule set. According to "nternet Security: FIREWALLS and BEYOND, “A network's firewall builds a bridge between the internal network or computer it protects, upon securing that the other network is secure and trusted, usually an external (inter)network, such as the Internet, that is not assumed to be secure and trusted.” These days, many computers and routers come with built in firewalls that protect the computer from treats on the internet.

The term firewall was originally used to describe a wall that is responsible for confining a fire to one particular room or building. This terminology was later adapted to refer to the current firewall technology that we have. The firewall technology emerged in the late 1980s, with the first paper on firewalls being published in 1988. Firewalls were developed in three generations: packet filters, ‘stateful’ filters and application layer. The first generation worked by examining packets and if a packet does not match the packet filter’s rules, it would automatically drop the packet or reject it and send error notifications. The ‘stateful’ filters performs the function of a first-generation processor and retains the packet until enough information is available to make a judgment about its state. The application layer filter can also understand certain applications and protocols to detect and reject connection from certain applications.

There are various different types of firewalls depending on where the communication is taking place, where it is intercepted and the state that is being traced. These include Network layer or packets filter, Application-layer, proxies and network address translation. The packet layer operates at a low level of the TCP/IP protocol stack and monitors incoming and outgoing packets. The application layer works on the application level of the TCP/IP layer monitors packets transference between applications or application and the internet. A proxy server acts as a firewall by allowing certain packets in the manner of an application and rejecting all other packets. Network address translation is more of a functionality of many firewalls that hides the true address of the protected hosts.