Key Difference: Apple Watch is a smartphone that is compatible with the iPhone models. Android Wear is the Android OS used in smartwatches, such as the Motorola Moto 360. 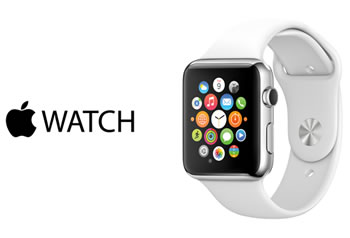 The Apple Watch hits the market in early 2015 and is available in two sizes and three editions. It also allows users to purchase different color straps in different materials, in order to customize it as they please. The watches work only with iPhones, so if a person who owns an Android, will have to choose an iPhone if they wish to purchase the Apple Watch. For the iPhone users, the Apple Watch is compatible with iPhones 5 and above. The watch comes with some built-in storage for apps, photos and music, but no news to how much storage is actually on-board.

Apple has made customization and accessibility its core focus when creating the Watch. The watch has fitness sensors that can measure heart rate, an accelerometer, location information, etc. Additionally, the watch can also talk to the iPhone in order to get other information. The phone comes with two Apple apps that are determined to track goals for exercise: Activity and Workout. Activity shows your progress toward daily goals for moving, exercising, and even standing. Workout is for more detailed tracking of a variety of activities, including distance, pace, time, and calories burned during each session.

Navigation also gets easier as Apple Watch allows navigation by touchscreen, digital crown and voice assistance. People with larger fingers, fear not, the digital crown allows the user to scroll through applications and zoom in an out of maps with ease. Pressing the digital crown works the same as pressing the “home button” on the iPhone. Another button visible just below the digital crown, brings up the Friends list. Using that list, the user can send messages or simply call their friends.

Another cool feature that Apple has introduced is the Tapic engine, which offers two things. One is different vibration patterns when using maps. The vibration for turning left, will be different from the vibration for turning right, making it easier to understand. The second is the ability to tap and draw personal messages or emojis. The person can draw emojis and various designs and send them to their friends. The Apple Pay feature from the iPhone is carried on to the Watch and can allow the users to pay without having the phone on hand. 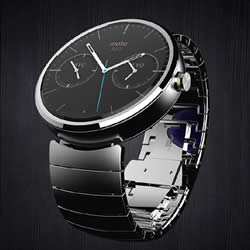 Depending on the type of Android Wear watch a person buys, the features and design change. However, one thing that is standard among all Android Wear watches is that they are compatible with any Android phones support Android version 4.3 and above.

The Moto 360 offers a stylish round bezel that promises to keep the user up to date with the latest notifications. The round bezel makes the watch stand apart, as currently it is only one of the few watches that are round in shape, with the rest opting for a more square or rectangular look. Moto 360 comes with leather bands, metal bands and is now adding slim bands. The screen is protected from scratches and bumps by Corning Gorilla Glass. The phone also allows personalized watchfaces, but from an option of 6 preinstalled ones.

The phone comes with built in applications including health and fitness applications that monitor heart rate and steps. It also comes with applications such as Facebook Messenger, Hangouts, Pinterest, etc. It is also open to 3rd party applications, allowing room for more customizations and personalization. Moto 360 comes with touch and voice assistance. The watch constantly listens for ‘Ok, Google’, and offers more accurate replies and suggestions. The phone is water resistant and touts all day battery. However, benchmarks claim that the battery may not last all day depending on usage. Although, it shows all notifications and also allows the user to reply using the phone, it does not have a independent calling feature. The user will be notified of the incoming call and can even receive it but will have to take the phone out in order to talk to the other person.