Difference between Bees and Bumblebees

Key difference: Bees are flying insects that pollinate plants and produce honey. Bumblebees are a type of bees.

Bees are flying insects that are known for their role in pollination and for producing honey and beeswax. They are closely related to wasps and ants. There are nearly 20,000 known species of bees; however there are more that are not currently known. Bees are present on every continent except Antarctica. They feed on the nectar and pollen of flowers and can be found in any habitat that contains insect-pollinated flowering plants. Bees use nectar as an energy source and pollen for protein, nutrients and as food for the larvae.

A bumblebee is any member of the bee genus, Bombus. Essentially, bumblebees are a type of bees. There are over 250 known species of the bumblebee. They are found mainly in the Northern Hemisphere, and some in South America. Like most bees, bumblebees feed on nectar and pollen. However, they tend to produce a smaller quantity of honey as compared to some of the other bees. 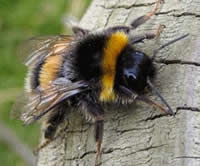 Bumblebees are social insects and live in a colony like most bees. However, their colonies tend to be smaller than other bees’. They are characterized by their soft hairy bodies. They have long, branched hair, called pile, which covers their entire bodies in black and yellow bands. This gives them the appearance of large furry bodies. Some species of the bumblebees have orange or red hairs on their bodies, and some may be entirely black. These hairs help the bumblebees to transport pollen back to their hives.

Also, unlike most bees, the bumblebees do not lose their sting and they do not die after they use it. They are also considered to be less aggressive that some of the other kinds of bees, which means that they are less likely to sting.

Another difference is that as compared to some other bees, which are cultivated for honey, bumblebees are cultured for agricultural purposes as they are considered to be good pollinators.

Bumblebees are really nice and wonderful.