Key Difference: The BlackBerry Q10 has a 3.1-inch AMOLED capacitive touchscreen that allows users to access data using touch and weighs approx 139 grams. Below the screen, there is a full QWERTY keyboard that is similar to those found on the old BlackBerrys. The device is powered by 1.5 GHz Cortex-A9 Dual-core TI OMAP 4470 processor and PowerVR SGX544 GPU. Samsung Galaxy S4 is the successor to the very popular Samsung Galaxy S3. The company boasts new features into a slightly smaller and sleeker design. The phone’s screen has been increased to a stunning almost 5 inches with only slight decrease in size of the phone. The screen is a full HD Super AMOLED capacitive touchscreen that provides a greater resolution of 1080 pixels, almost 441ppi density. 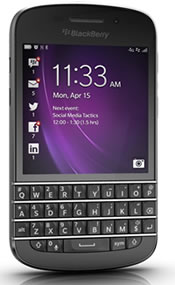 Blackberry added a new phone, Q10, to its growing line-up that is aimed at the original users as it features a full QWERTY keyboard. Separating themselves from the full-touch smartphones, the company is trying to garner attention among the users that do not have time to play with touchscreen and require keyboard for typing. However, fret not; the device is also has touch capability on its screen.

The BlackBerry Q10 has a 3.1-inch AMOLED capacitive touchscreen that allows users to access data using touch and weighs approx 139 grams. Below the screen, there is a full QWERTY keyboard that is similar to those found on the old BlackBerrys. The phone has a custom glass-weave black panel that can be popped off to access the battery, SIM and microSD card slots. The USB and the charging port can be found on the left side of the device, while the right side has the volume rocker and a middle button for play/pause and quickly toggling vibration mode. The Power button is placed at the top of the screen, while the mic and the loudspeaker are placed on the bottom of the device. The back of the device has the camera and the flash, which is separated from the removable back by a metal band.

The company has also incorporated the features and apps that are found in the Z10 including The Hub, which is a screen that is available by swiping left after the first menu page and task switcher and it is creates a single point where the user can check all updates from SMS, e-mail to facebook notifications. The phone also comes with Blackberry Balance that allows users to create multiple profiles on their phone separating their professional life from their personal life. Other included features also include LED Indicator, BlackBerry Story Maker, Universal Search, already loaded Blackberry Apps and other apps such as Facebook, Twitter, LinkedIn, etc. The phone houses a 2100 mAH removable battery.

Samsung Galaxy S4 is the successor to the very popular Samsung Galaxy S3. The company boasts new features into a slightly smaller and sleeker design. The phone’s screen has been increased to a stunning almost 5 inches with only slight decrease in size of the phone. The screen is a full HD Super AMOLED capacitive touchscreen that provides a greater resolution of 1080 pixels, almost 441ppi density. The weight of the phone has also been reduced to 130 g and the width of the phone has been reduced by 1mm. The phone has sharper and straighter lines with just curved edges. In terms of design it is quite similar to the S3. The chassis is made up of polycarbonate plastic and the display is highly sensitive that accepts touch through gloves. The phone is available with either the 1.6 GHz octa-core Samsung Exynos 5 processor or the 1.9 GHz Snapdragon Fusion Pro quad-core processor, depending on the market. It is available with 16/32/64 GB internal capacity options and if that is not enough it can be upgraded by another 64 GB using the SD slot. The S4 comes with 2 GB RAM, which has become a norm for smartphones these days.

Group Play is a feature that allows users to use NFC or Bluetooth to tap and transfer videos, photos, music and even engage in multiplayer games with other S4 users. There are many new camera features as well including dual camera, sound & shot, drama shot, story album, cinema photo and eraser mode. Dual camera allows users to use both the cameras at the same time including when trying to take a photo. The person taking the photo can place their face to the photo taken using the secondary camera or vice-versa. Sound & Shot feature takes 9 seconds of audio when capturing a photo. Drama Shot combines all the actions from a Burst shot into one screen. Story album enables the users to create an album using their shots and audio. Cinema photo feature allows the users to animate one portion of an image, while keeping the rest simple. Eraser Mode allows users to erase objects from the image that they do not wish to include. Other features also include S Health (users can track their diet, steps, exercises, etc.), S Translator, S Voice assistant, Galaxy S Voice Drive and Integrated Optical Reader. Samsung has yet to announce the release date and the price of the S4.

The information for the detailed table about the two phones has been taken from Blackberry website, Samsung Mobile website, knowyourmobile.com, expertreviews.co.uk and GSMArena.com.