Difference between Boolean and Binary

Key Difference: In the field of computers and electronics, Boolean refers to a data type that has two possible values representing true and false. It is generally used in context to a deductive logical system known as Boolean Algebra. Binary in mathematics and computers, refers to a base 2 numerical notation. It consists of two values 0 and 1. The digits are combined using a place value structure to generate equivalent numerical values. Thus, both are based on the same underlying concept but used in context to different systems.

Booelan denotes a system of algebric notation that was created by George Boole. The system can be defined by the occurrence of two states – True or False. 1(yes/on) are regarded equivalent to true, whereas 0 (no/off) are regarded as equivalent to false. Thus, we can say that Boolean Algebra is based on a binary (two values) system. It uses operators to determine the comparison between the bits. The most often used operators are AND and OR. 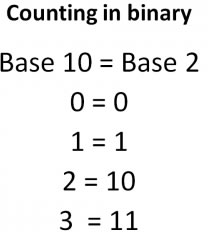 Generally the word, binary is associated with two states know as 0 and 1. In mathematics, it specifically refers to base two arithmetic that uses the digits 0 and 1, therefore, the arithmetic is also defined as the binary arithmetic. Thus, we can say that Boolean values are represented with the notation of binary digits. Therefore, many times Boolean algebra is also known as the binary logic. However, Binary system is used to denote a system that is expressed in numerical notation that has base 2.

Comparison between Boolean and Binary: