As per Wikipedia: “A clay court is one of the four different types of tennis court. Clay courts are made of crushed shale, stone or brick”. 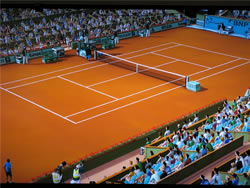 The tennis clay courts are made up of many types of clay such as the red, green, blue, gray, maroon and yellow clay. These have a hard base. It is found that it is very difficult to play in these courts. The red clay courts are considered to have the slowest surface. It becomes difficult for the player to bounce the ball high while hitting in these courts, whereas, the green clay court are slightly faster and favors the players. Clay courts show the uniqueness in which the ball bounces, and helps to determine whether a shot was in or out the court.

The disadvantage of a clay court is that it need to be kept wet all the time, otherwise they dry-off easily and create a problem of hardness and roughness, due to which it becomes difficult for the player to continue the game. 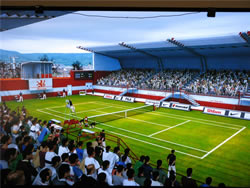 As per Wikipedia: “Grass courts are made of rye grass in different compositions depending on the tournament”.

These are strictly made up of different composition of grass (rye-grass). They are slippery type of courts. It is found that the ball often skids and bounces low on these courts, because of its slipping tendency. Hence, the players have to respond quickly while performing on these courts. From this, it proves that the players on the grass court need to be experienced and should have speed in playing.

The grass courts are to be maintained very properly in order to maintain the moist capacity of the grass. Although they are more traditional than other types of tennis courts, their maintenance costs are higher than those of hard courts and clay courts. They become wet and slippery if not covered with a suitable cover, at the time of rains.