Difference between Convex and Concave Curves 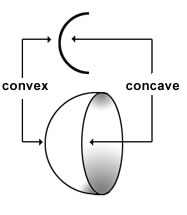 A curve is very different from a straight line. A curve has a varying slope. It is a wiggly line or bent line which wiggles or bends to join any two points on a graph or a map. Curves can be divided into categories of convex and concave curves. A concave curve rounds inward. On the other hand, a convex curve is rounded like the exterior of a sphere or a circle. Many people understand the terms by considering that a concave curve is similar to a valley and a convex curve is similar to a mountain. Thus, it helps in remembering the differences between the two.

In a concave curve, a straight line connecting any two points on the curve lies entirely under the curve. However, in a convex curve, a straight line joining any two points lies totally above the curve. Both the curves are regarded opposite to each other. Therefore, a negative convexity refers to a term named as concavity. Concavity and inflection point describe the directions of a curve. Concavity describes the way that a curve bends. An inflection point is a point where the function has a tangent and the concavity changes. For example, if a curve is concave down (simply concave) then the graph of the curve is bent down, otherwise for the case of a concave up (convex) type of curve, the graph of the curve is bent upward. Convex and concave are often used to denote a gentle and subtle curve that is generally found in mirrors and lens.

Comparison between Convex and Concave Curves:

I think you need to swap the mountain and valley. Isn't the valley equivalent concave up or convex and the mountain concave down or strictly concave?