Difference between Cretinism and Goitre

Key difference: Cretinism is a condition arising from the deficiency of a thyroid hormone, which is characterized by dwarfism and mental retardation. Goitre is a swelling caused in the thyroid gland by under or over production of hormones by the gland.

According to Wikipedia, cretinism is a condition of severely underdeveloped physical and mental growth due to untreated congenital deficiency of thyroid hormones. It is usually due to maternal hypothyroidism. 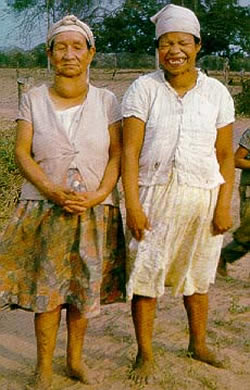 Congenital hypothyroidism is considered to be endemic, genetic, or sporadic. If it remains untreated, the condition may results in mild to severe impairment of both physical and mental growth and development. The pause in the growth and height can be noticeable as early as in the first year of birth. In an adult, the stature without treatment ranges from 1 to 1.6 meters. It depends on severity of the disease, sex and other genetic factors. Cretinism results in mental deterioration, swelling of the skin, loss of water and hair. There is a delay in bone maturation and puberty. Ovulation is impeded and infertility is common. It also causes neurological impairment. The impairment can be mild with reduced muscle tone and coordination, or so severe that a person cannot stand or walk. Cognitive impairment may also range from mild to so severe that the person becomes nonverbal and is dependent on others for basic care and need. The thought and reflexes become slower. Other symptoms include thickened skin, enlarged tongue or a protruded abdomen. It also causes goitre.

Periodic and genetic cretinism results from the abnormal development or function of the foetal thyroid gland. This type of cretinism has been eradicated, due to early diagnosis of this condition. It is diagnosed by newborn screening schemes along with the lifelong treatment of thyroxin.

Cretinism arises due to deficiency of iodine from the body. Iodine is an essential trace element; it is necessary and required for the synthesis of thyroid hormones. Iodine deficiency is the most common preventable cause of brain damage. It is absent from the diet of the people, which can lead to cause cretinism. Although iodine is found in many foods, as it is not universally present in all soils or in adequate amounts.

It can be prevented by proper consumption of iodine on a daily basis in people’s diet. 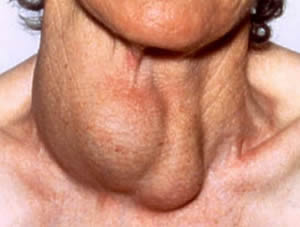 According to Wikipedia, Goiter is associated with hyperthyroidism and hypothyroidism, and may be present with various symptoms, that are common among these disorders. The most common symptoms for hyperthyroidism are weight loss despite increased appetite and heat intolerance. Hypothyroid individuals have weight gain despite of poor appetite, cold intolerance, constipation and lethargy. However, these symptoms are often nonspecific and hard to diagnose.

Goiter is classified on the basis of growth pattern and size. There are two types of goiter; simple and toxic nodular goiter. A simple goiter can occur for no reason, or when the thyroid gland is not able to produce enough thyroid hormone to meet the body's needs. The thyroid gland makes up for this by becoming larger. Toxic nodular goiter involves an enlarged thyroid gland that contains a small, rounded growth or growths called nodules. These nodules produce too much thyroid hormone. In most cases of simple goiter, the cause is unknown. Sometimes, certain medications such as lithium or aminoglutethimide can cause a simple goiter. It is common in adults over the age of 40, people with a family history of goiter and women.

Goiter can be treated according to the cause. If the thyroid gland is producing too much of T3 and T4, then radioactive iodine is given to the patient to shrink the gland. If goiter is caused by iodine deficiency, then small doses of iodide in the form of Lugol's Iodine or KI solution are given. If the goiter is associated with an under active thyroid, thyroid supplements are used as treatment. In extreme cases, a partial or complete thyroidectomy is required.

Comparison between Cretinism and Goiter: