Difference between Farther and Further

Key Difference: The term ‘farther’ denotes physical distance, while the term ‘further’ can be used to denote abstract and figurative space. 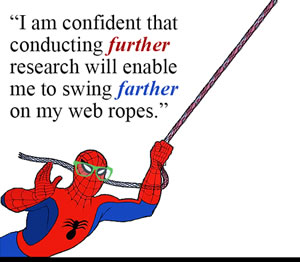 The terms ‘father’ and ‘further’ are often confusing because of its ability to be interchanged with each other. In many contexts, the terms can actually be interchanged, which adds to the confusion of the two words. However, fret not there is an easy way to distinguish between the two.

Both the terms are can sometimes be used as adjectives and sometimes as adverbs, with only the part of the speech that helps determine the difference between the two. A quick way to tell them apart is for the term ‘farther’ to denote physical distance, while the term ‘further’ can be used to denote abstract and figurative space.

Farther: “How much farther to the gas station?”

Further: “Nothing could be further from the truth”

The term ‘further’ can also be used to denote more and can mean furthermore, moreover, more, additional, extra and supplementary. Example includes, “She does not need any further clarification on the subject.”

Comparison between Farther and Further: