Difference between Frame and IFrame

Key Difference: Frame is a HTML tag that is used to divide the web page into various frames/windows. Used as <frame> tag, it specifies each frame within a frameset tag.  Iframe as <iframe> is also a tag used in HTML but it specifies an inline frame which means it is used to embed some other document within the current HTML document. 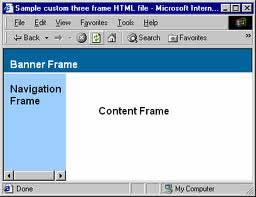 Both frame and iframe are part of HTML tags. To clarify it further, let us start with the definition of HTML: HTML is a language that is used to create web pages. The coding in the HTML is done through various tags. HTML stands for HyperText Markup Language, and it is a set of markup symbols or codes that are inserted in file and get displayed on a World Wide Web browser page. Frames are used in HTML to divide a browser window into many panes and each pane contains a separate HTML/XHTML document. These tags have different features and different outputs. To start with 'frame', we can define it as a HTML tag that is used for dividing the web page into various frames/windows. It is  used as <frame> tag, each frame can be specified within a frameset tag. Refer to the picture in the left. Here, in this example the window is subdivided into various frames like Banner Frame, Navigation Frame and Content Frame. Each Frame can be linked with a source and three of them may contain three different sources.

Iframe as <iframe> is also a tag used in HTML but it specifies an inline frame which means it is used to embed some other document within the current HTML document. The frames can be organized in terms of rows and columns.  Frame and iframe, both tags are used to fit several frame windows on a web screen. Frame object represents an HTML frame and IFrame object represents an HTML inline frame. Both have the properties of frame border, height, align, name, scrolling, source, etc. Frames allow several pieces of information to be seen together side by side, but it faced a lot of criticism due to many factors. One of them was that different browsers react differently with frames.

Frame tag is used to divide the page into various windows. For example –

This code shows the page with 4 windows. All of them with equal ratio as depicted by the 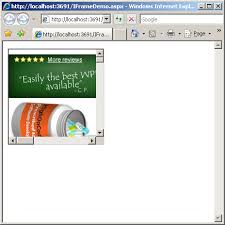 percentage set in <frameset> tag. Each of these four frames can have different attributes like border, scrolling, resize ability, etc.

<frameset> tags were used to create frames with the tag frame whereas iframe fulfills functions of both frame and frameset tags. Unlike frame tags, Iframe tags can also be placed inside the body tags. Placement of iframe is easy, a coder can easily put the tag among the other webpage elements, and also add several iframes if he wants. On the other hand, placing frames in framesets is bit complicated. The coder needs to adjust the frame sizes to display them correctly. Sizing in terms of width is very difficult for frames than in iframes. In frames, the widths of the frames must add up correctly to the width of the web page, whereas in iframe you can just denote the height and width in pixels or in a percentage of the width of the web page and it gets displayed at that particular place in the web page. Summing up the differences in the table below:-

Some what I understood....

Hi there, Thank You so much for explanation, it cleared up my confusion. :-)

yo this is goot

Preety Easy to understand for a beginer too.

Very good explanation out there with understandable examples!. Thank you.