Key Difference: Global warming is when the average temperature of the Earth’s atmosphere and the oceans rise. Greenhouse effect is the retention of the heat by the greenhouses gases on the surface of the Earth, allowing the planet’s temperature to rise.

Global warming and the greenhouse effect are two terms that have been constantly under debate among environmentalists, who are currently fighting to reduce the effect of these dangerous conditions on the Earth. Both global warming and greenhouse effect are related to each other and are greatly responsible for early springs, really hot summers, really cold winters and even most of the natural disasters that are happening around the world. These two play an important part in the sustainability of the Earth and are completely different from each other. 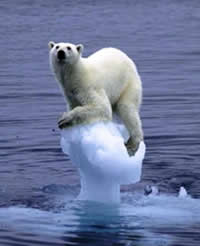 The constant increasing of the temperature has been credited to the increasing concentrations of greenhouse gases produced by human activities such as the burning of fossil fuels and deforestation. The increase in human activities as well as human population has shown an increase in the amount of emissions that are produced world-wide. A surge in use of cars, fridges, planes, etc. has resulted in rise of emissions which are directly responsible for global warming.

According to research, the effects of global warming vary from region to region around the world. Few examples of global warming effects include a rise in sea levels and a change in the amount and pattern of precipitation, as well a probable expansion of subtropical deserts. It will also result in the melting of glaciers and ice in the Arctic and the Antarctic. Extreme weather changes such as droughts, heat waves, natural disasters, heavy rainfall, etc. are also said to be effects of global warming. Many countries have collaborated in order to cut down the emissions all around the world; however it has been met with difficulties, where developed countries are asking developing countries to put a limit on emissions, similar to those as developed countries.

The theory of greenhouse effect was first argued by Joseph Fourier in 1824, which was further strengthened by Claude Pouillet in 1827 and 1838 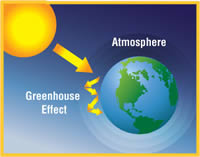 The greenhouse effect is a process by which thermal radiation from a planetary surface is absorbed by atmospheric greenhouse gases, and is re-radiated in all directions. The Earth receives heat and energy from the Sun in the form of UV, visible, and near IR radiation. Most of this energy passes through the atmosphere without being absorbed. Of all the total amount of energy that is available at the top of the Earth’s atmosphere, approximately 50% of this energy is absorbed by the planet’s surface. The rest of the energy is reflected back toward the sun, mostly by clouds.

The retention of the heat on the planet is due to the greenhouse gases. The greenhouse gases (GHG) are responsible for trapping heat on the surface causing the heat to be absorbed by the Earth, which then promotes global warming. Four major gases that are responsible for the greenhouse effect are water vapor, carbon dioxide, methane and ozone. The greenhouse effect is being strengthened through human activities, which mainly contribute to increased carbon dioxide level. Carbon dioxide levels have been increased due to burning of fossil fuels, deforestation and increase the human population. Greenhouse gases warm the earth by re-radiating some of the energy back towards the surface, allowing for more heat absorption and rise in the temperature of the Earth.

Who is the author of this page? or who wrote this esssay?

very good and educating. i like it . it is very easy to understand.