Difference between Glucose and Fructose

Key Difference: The term “glucose” is derived from the Greek, “glukus”, meaning “sweet”. Glucose is also known as D-glucose, dextrose, or grape sugar is found in plants and it is a byproduct of photosynthesis and fuels for cellular respiration. Glucose is used as energy by living organisms. Fructose is also known as fruit sugar, as it naturally and most commonly occurs in fruits and plants. 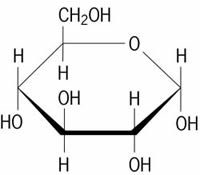 The term “glucose” is derived from the Greek, “glukus”, meaning “sweet”. The suffix ‘-ose’ denotes that it is a sugar. Glucose is also known as D-glucose, dextrose, or grape sugar is found in plants and it is a byproduct of photosynthesis and fuels for cellular respiration. Photosynthesis is the process where the plants produce their own food using carbon dioxide, water and sunlight. It is a dietary carbohydrate that is directly absorbed in the bloodstream during digestion. In living organisms such as humans, plants and animals, glucose is used as a body fuel and energy. Excess glucose is stored in the form of glycogen in animals and humans and in the form of starch in plants.

Though glucose is most commonly found in the form of food, it can also be found in the form of tablets, powder or liquid. Glucose in the form of dextrose is given to a person who suffers from a condition known as diabetes. Diabetes is a disease where a human’s body stops processing insulin which converts glucose into energy. In industry, glucose is used as a precursor to make vitamin C, citric acid, gluconic acid, bio-ethanol, polylactic acid and sorbitol. The presence of sufficient levels of glucose in the blood stream is the primary mechanism that controls the feelings of hunger and the desire for more food.

Fructose is also known as fruit sugar, as it naturally and most commonly occurs in fruits and plants. Along with glucose and galactose, it can be directly absorbed into the bloodstream during digestion. Fructose is highly water-soluble, and appears as very sweet, white, odorless, crystalline solid. It is in fact twice as sweet as sucrose. Fructose can be found in honey, tree and vine fruits, flowers, berries, and most root vegetables. Fructose should not be confused with high fructose corn-syrup (HFCS), which is an artificially created and processed sweetener.

In regard to fructose, like all things, it is beneficial in small quantities, as there is evidence that it may help your body process glucose properly. However, consuming too much fructose at once seems to overwhelm the body's capacity to process it. When there is too much fructose in the body, the liver can't process it all fast enough. So, instead it turns them into triglycerides, and sends them into the bloodstream.

High blood triglycerides are a risk factor for heart disease. In addition, fructose does not trigger appetite-regulating hormones, hence leaving the brain feeling unsatisfied, which in turn continues to send hunger messages, leading to overeating. Studies estimate that about 10% of the modern diet comes from fructose. High fructose corn syrup has become incredibly inexpensive and abundant; hence it has crept its way into a great number of the foods today. High fructose corn syrup (HFCS) is made up of 55% fructose and 45% glucose. However, sucrose is half fructose and half glucose. So, HFCS actually doesn't have a whole lot more fructose than "regular" sugar.