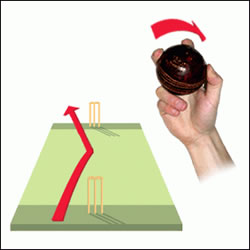 Cricket is a strategic sport, similar to all other sports. There are different game plans and different strategies that are used to ensure having an advantage over the opposing team. Leg break and leg spin are two bowling strategies that are used to confuse the batsman. Both techniques seem similar because the ball follows the same trajectory; however, they are slightly different.

A leg break is a type of leg spin delivery. A leg spin delivery is when the bowler spins the ball so that when it hits the ground, the ball swerves sharply from the leg side to the offside, which is away from a right-handed batsman. A leg spinner uses a wrist-spin action that causes the ball to deviate at the point of delivery. When the same type of delivery is performed by a left-handed bowler, it is known as left-arm unorthodox spin bowling or ‘Chinaman’.

Wikipedia’s cricket glossary defines ‘leg spin’ as, “a form of bowling in which the bowler imparts spin on the ball by turning the wrist as the ball is delivered, and for that reason also known as "wrist spin". The stock delivery for a leg spinner is a leg break; other leg spin deliveries include the googly, the top spinner, and the flipper.” 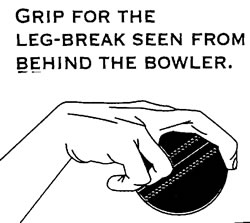 Leg breaks are bowled by holding the ball in the palm of the hand with the seams under the fingers. As the ball is released, the wrist is rotated to the left and the ball is let go from the hand over the ring finger. The rotating of the wrist gives the ball an anti-clockwise spin, which can be seen from behind. When the ball hits the ground, the spin causes the ball to deviate to the left (off-side) and away from the batsman. A leg spin bowler will bowl mostly leg breaks, varying them by adjusting the line and length of the deliveries.

Leg spin bowlers bowl the ball slower compared to fast bowlers. The ball can travels up to 75-95 kilometers per hour, with the fast leg spinners bowling up to 100 k/h. Leg spinners depend on the wind speed, wind direction and the aerodynamic effects of the spinning ball when delivering a ball. The speed of the ball is also determined on the wind factor. A leg spin ball is very difficult and hard type of bowling to master. If delivered right, the ball can cause the batsman to become confused and turn away from the ball.