Difference between Reptiles and Amphibians

Key difference: Reptile and amphibian are distantly related to each other; hence both are ectothermic, vertebrates and have three-chambered heart. They main difference between reptiles and amphibians are that reptiles live on land, whereas amphibians live on both land and water.

Reptile and amphibian are distantly related to each other; hence they also have a number of similarities. They both are ectothermic, which means that they are cold-blooded. They are also vertebrates, i.e. they have backbones. With the exception of crocodiles and some other lizards, almost all of the reptiles and amphibians have a three-chambered heart.

However, like all things reptiles and amphibians have their differences, as well. They main difference between reptiles and amphibians are that reptiles live on land, whereas amphibians live on both land and water. The word “Amphibian” is derived from the Ancient Greek term, “amphibious” which means “both kinds of life”. Amphibians live double lives, one in the water, where they are born with gills and one as they grow older and develop legs and lungs, which allow them to survive on land. Early amphibians were a crucial link from fish to terrestrial reptiles. They were the first animals to leave the sea and venture onto the land. 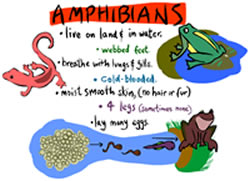 Reptiles, on the other hand, mainly live on land. Some reptiles, such as crocodiles, alligators, and various snakes do enter the water and spend time there; however, they do not live underwater and they do not need to venture into the water. They can easily survive on land alone, like thousands of other species of reptiles.

The word, reptiles means “to creep stealthily under cover of darkness.” Reptiles, in general, have dry, scaly skin; they breathe air through lungs, and usually lay eggs. Reptiles live on every continent except Antarctica and in varying conditions. Amphibians, on the other hand, are mainly found near fresh water sources, such as lakes, rivers, etc and/or in tropical area with abundant rainfalls and moist areas.

Detailed comparison between reptiles and amphibians: