Key Difference:  Ants are animals belonging to the family Formicidae of Order Hymenoptera under the Class Insecta. There are more than 12000 ant species which are known it in this world. Some of the common types include pavement ant, thief ant, cornfield ant, pharaoh and large yellow ants.

Ants are among the common insects. They are often confused with the termites due to their appearance. Ants can be recognized by their large heads and elbowed antennae. Their body has primarily three sections which are the head, middle section known as the thorax and the abdomen. They have six legs linked with the thorax, and three on each side.  Ants belong to the order Hymenoptera. They usually live in nest communities.

Some of the common household ants are – 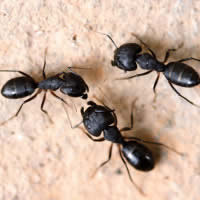 Carpenter ants – These ants belong to the genus Camponotus and are known for excavating wood. They are characterized by petiole with one node, an evenly rounded upper surface of thorax (workers). They do not consume wood but just chew and convert it into sawdust. This is done by them usually for making pathways, tunnels, or nests.  These ants are omnivorous. These ants are one of the largest ants in the United States, and range from 3.4 to 13 mm long. They are most commonly found in black color. However, some species may be red or yellow colored. 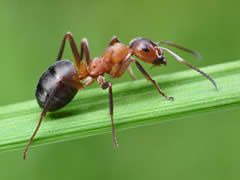 Cornfield ants – These ants belong to the species of Lasius. These are usually small ants ranging less than 1/8 inches. They are colored brown in lighter to medium tones.  They have large eyes in comparison to head. Their nesting site is generally soil. These can be differentiated from the carpenter ants due to their smaller size.  It also possesses a notch in the middle part of the body, whereas carpenter ants are completely round with no notch. 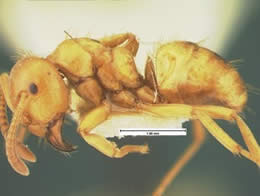 Large yellow ants – These ants are ground nesting ants and are not a danger for houses as they do not infest them. The workers are ¼ inches long and are bright yellow in color. They are easily characterized by their yellow color and lemon like odor. It is also known as the foundation ant. The workers feed on honeydew collected from aphids and meal bugs.

Pharaoh ants –These ants are very small nearly about 2 mm ling. They are light yellow in color and possess red and black markings on the abdomen. These ants have two nodes. The antenna of these ants has 12 segments and ends in a three segmented club. They are often confused with the thief ant. They make their nest in any dark area which includes sites like window moldings, inside hollow curtain, etc. 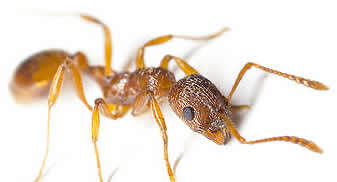 Thief ants – These belong to the one of the smallest household ant species as their size ranges from 1.5 mm to 2.2 mm long. They are yellowish to brown in color and are unevenly rounded. Their thorax does not contain spines. They are known as thief ants as they take the food and brood from other ants. Due to their smaller size, it becomes difficult to get hold of them. It is also known as grease ant. 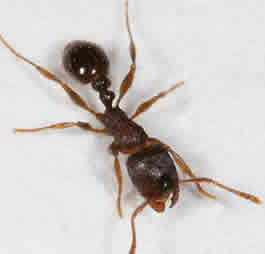 Pavement ants – These ants are small in size and are brownish black or brown in color. Their worker ants are all nearly 3 mm long. It is a two node ant and possesses antennae with 23 segments. They like to construct their homes in pavement, and therefore are known as pavement ants.  They feed on a variety of food which includes mead, bread and sweets. 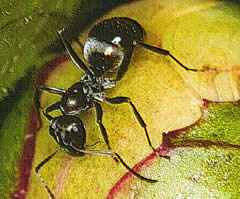 Field ants – These ants are nearly ¼ inches long and are usually colored black. However, some species are red and black in color. They are generally found in healthy grass or pasture. They have a petiole with one node and an uneven thorax when observed from the side. Worker ants do not possess wings like Queen and male ants.

False honey ants – It is a small ant whose size is approximately 1/8th of an inch long. It is generally golden brown in color but they may sometimes give a black color appearance, it has an hourglass type of abdomen. They are named for their love towards sweet products. They belong to the genus Prenolepis.  They stay in colonies with properly defined castes. Many queens and male ants have wings. 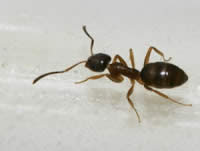 Odorous house ants – These scavengers are a small species of ant. They appear brow to black in color. They are not very harmful but still can contaminate the food. On crushing them, a smell of rotten coconut is produced. Their workers are nearly 1/10 inch long. They have petiole with one node; node is concealed by abdomen. They primarily feed on sweets and insects. 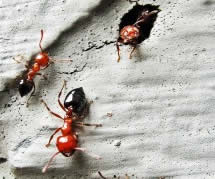 Acrobat ants – These ants have got their name from their unique habit of placing their abdomen over their thorax. They are yellowish, brownish or blackish in color. There workers are nearly 1/8 inch long. They petiole is attached to the top of the abdomen.