Difference between HB and F Pencil

Key difference: Pencils are marked on the basis of a European system called ‘the degree scale’, wherein a HB pencil has a medium range lead and the F pencil has a fine point, which is harder than a HB pencil.

Pencils are popular tools used for writing as well as drawing purposes. Pencils are made of wood with a graphite core inside; it is actually the combination of clay and finely grounded graphite, mixed with water and pressed together at high temperatures to make thin pencil rods. This process was developed by Nicolas-Jacques Conté, a Frenchman, in 1795, and it is still the widely used method by pencil manufactures.

From the above pencil shade chart, one can say that the pencils differ according to their different shades of color. Also, based on the hardness of their lead, pencils are classified into hard and soft leads. Terms such as HB, B, F and H are generally used. Here, the H stands for ‘hard’ which is designated for hard leads, and B stands for ‘black’ which is designated for softer leads. The term ‘F’ stands for fine point. 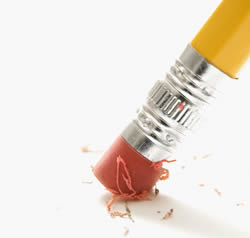 The pencil grades are also based on the amount of clay and graphite used to make the pencil. If the amount of clay is more, the pencil will have a harder lead, whereas if graphite is more, the pencil will have a softer lead. By referring to the chart, it can be said that the fine point pencil has a harder lead as compared to the HB pencil. This is the only main difference between the two pencils; except their names and shade differences, the two pencils are quite similar in nature.

Although, the term ‘HB’ is universal and is usually printed on all pencils, ‘F’ pencils are also widely used. Both these pencils are known to be standard and are used for both general writing as well as drawing purposes. The HB pencil has a limited amount of clay, which gives a medium line density while using, and is mediocre in shade. It is easy to erase, which is why it is used by children to improve their 'penmanship' in school. On the other hand, F pencil has a limited amount of graphite, which gives it a lighter shade and less density on paper. Being light in color, they are also easy to erase. However, both have good tensile strength, and give a smooth feel while writing. They are regularly used by artists, as they keep switching between the harder lead for light shading, and a softer lead for dark shading.

The few differences between the two pencils can be understood from the table below.

Comparison between HB and F Pencil: