Difference between Human and Monkey DNA

Key Difference: Studies show that chimps and humans share a 96% similarity in DNA. Humans, chimps and bonobos differ from gorillas by 1.6%, while humans and the African apes differ from the orangutan by a difference of 1.3%. All great apes, including humans differ from monkeys by 7%. 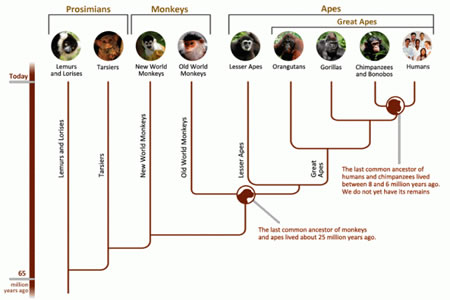 Humans have always been known to share ancestry with the monkeys, or chimpanzees to be scientifically accurate. This bit of information has been in constant debate since the announcement made by Charles Darwin. We now know that Darwin was right, but to what extent? Oh, let’s just say he was 96% accurate in suggesting that Chimps and Humans are similar.

DNA, or Deoxyribonucleic acid, is the building block of every organism’s genome and is in the nucleus of every living organism’s cell. It contains genes, which are the molecular codes for proteins – the building blocks of our tissues and their functions. It also has codes or instructions that tell which cell function in which manner. Additionally, it also contains molecular codes that regulate the output of genes. DNA is considered as the most important part of a living organism, which determines everything from looks to bodily functions. Hence, it is an important part of study when it comes to evolution.

A study was conducted by an international group of scientists called the Chimp Sequencing and Analysis Consortium in 2005. The study compared multiple strands of genetic code of human and chimp DNA to determine the similarity and differences between the genes.

The major difference between the humans and chimps lie in the number of chromosomes that each species has. While, chimps have 24 pair of chromosomes, humans only have 23. The reason is believed to be the reason for many differences between the species. According to the study, two ancestral ape chromosomes have fused at their telomeres and resulted in the production of human chromosome 2.

There are various different ways to analyze and compare the genomes, each giving different impressions about how similar chimpanzees and humans are. The 1.2% difference between chimps and humans is by measuring only the base building blocks of genes that are shared by both the species. The comparison of the entire genome – including the segments of DNA that have been deleted, duplicated and inserted from one part of the genome to the other – would result in a difference of 5-6% between the two genomes.

600 genes have been identified that is believed to show signs of undergoing strong positive selection in the human and chimp lineages, many of these genes are involved in  immune system defense against microbial disease or are targeted receptors of pathogenic microorganisms. The changes in the genes are also the reasons for the ability of humans to speak and the bigger, more complex brain.

Comparing human and chimp genes to other mammals has shown that genes coding for transcription factors, such as forkhead-box P2 (FOXP2), have involved faster in humans than in chimps. Small changes in the genome has resulted in the morphological differences between the two species.

During the past 250,000 years, six human chromosomal regions show that they have gone under particularly strong and coordinated selection. These regions contain at least one market allele that seems unique to the human lineage, while the rest of the entire chromosomal region shows lower than normal genetic variation. The scientists believe that a few strongly selected genes in the chromosomal region may be preventing the change in other, nearby genes. These include the human development of salt-secreting epithelium of sweat glands as a means to survive cholera and the developmental patterns of the human brain compared to the patterns seen on the ancestral great ape.

The results from the analysis between human and the chimp genome, along with comparison with other genomes, are believed to be the key to understanding human diseases.