Difference between Illustrator and Photoshop 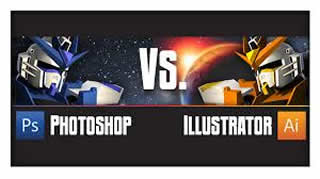 Both Illustrator and Photoshop are design software from Adobe. Illustrator software is used as a vector graphics editor. It is mainly used for drawing various types of things. There have been numerous versions of this software. Initially, it was developed for Apple Macintosh in 1986. It provides its functionality in the typesetting and logo graphics. It is based on vector graphic technique which means that the images are mathematically drawn by the computer. Thus, one can easily make changes in the images without bearing any loss in quality. Thus, one gets the advantage of resizing in an efficient manner.

Composition in Illustrator involves points and lines, and thus an individual can work easily on even individual line segments. Three dimensional applications and realistic brushes have been added in the latest versions. It is generally used for creating logos, vector paintings, card designs, cartoons, etc.

Photoshop is also a product from Adobe. It was developed in 1987 by the American brothers Thomas and John Knoll. The distribution license was purchased by Adobe Systems in 1988. Its capabilities are quiet different from the Illustrator program. It is generally renowned for photo editing types of tasks. Unlike Illustrator, it is a raster graphic/ Bitmap graphic application, which implies that it directly deals with the pixels of the images. It can be termed as an image processing and manipulation program. Common uses of Photoshop images include photos, digital illustration, UI designs, etc.

In 2003, Photoshop got a place in the Adobe Creative suite with other programs like Illustrator and InDesign. Later it was renamed to Photoshop CS which provided extended features for a greater control over the images. It does not give a good result for enlargement of images, as the pixels tend to spread out. It cannot be used for creating a crisp diagonal or curved line too. Photoshop Extended is often preferred for 3D compositions. Its Lightroom version offers an advanced toolkit for editing digital photographs.

Comparison between Illustrator and Photoshop: