Difference between La Tomatina and Holi 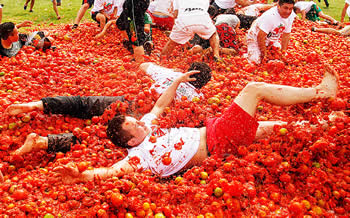 If someone who is not part of either culture looks at La Tomatina and Holi, to them both of these festivals will look quite similar as it requires throwing things at each other in pure fun. However, these are two different festivals and are celebrated for very different reasons.

La Tomatina is a Spanish festival that includes throwing ripe tomatoes at other participants in an attempt to drench them in tomato juice for good fun. The festival itself lasts the whole week and includes festivities such as parades, dances, cooking contests and other such activities. On the chosen day – which is the last Wednesday of August – people congregate on the street.

The festivities begins with a ham on top of a greased pole with people climbing on top of each other to try and grab the ham, while the surrounding people will cheer, sing and dance and be hosed down with water to add to the merriment. Once the ham is released, a large water canon sounds and big trucks of tomatoes are brought to the street. The people start chucking the ripe tomatoes at other people, until an hour later, when another water canon sounds the end of the throwing. The end of the tomato fight results in being hosed down by the fire trucks. The trucks also hose down the street to clean the tomato dregs and juices left over from the fight.

La Tomatina can be dated back to the last Wednesday of August 1945, when a few young people congregated to the town square to attend the Giants and Big-Head figures parade. They decided to join the parade as a musician and in all the excitement, they caused a person to fall over from the float. The participant who fell from the float went into a fit of rage and started throwing things at random people and passersby. Within reach was a vegetable stall, which resulted in a lot of people throwing tomatoes at each other before the police had to break up the fight. Since then it has become a tradition to meet up every year on the last Wednesday of August and repeat the fight of tomatoes just because.

Holi is an Indian festival that includes throwing colored powder and colored solution at other people in order to color them. The festivities can also include pichkaris (a gun that can be loaded with water or colored solution) or water balloons. The festival usually lasts over 2 days, but in some parts of India, it can last for a week. The first part of the celebration is known as Little Holi, which involves burning a pile of wood and placing offerings to it such as coconut, rice, turmeric powder, rice and other such items depending on the region. The burning is followed with dancing and music and is supposed to signify welcoming of spring as well as the triumph of good over evil.

The festivities continue on the second day with people waking up to color each other with powdered color (inside the house) and then meeting outside in an open area and drenching each other with water and watered color. The objective is to color people with various different colors. Festivities can also include dancing and music and also sweets and bhang (a drink made with mixing milk with an intoxicating substance made from the cannabis leaf). The festival signifies the victory of good over evil, the arrival of spring, end of winter, and for many a festive day to meet others, play and laugh, forget and forgive, and repair broken relationships, and is also celebrated as a thanksgiving for a good harvest. 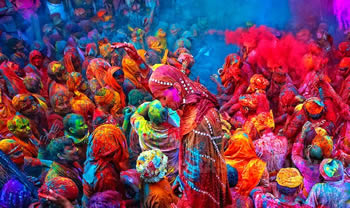 In some states such as Gujarat, a pole will be erected with a pot of milk and butter on the top. The men are supposed to climb on top of each other in order to break the pot (or handi in Hindi), which signifies Lord Krishna’s love for Butter and his attempts to steal butter. The ladies are on higher floors and drench the boys in colors and colored water in an attempt to discourage them. This signifies Radha’s attempt to keep Krishna from stealing the butter.

While both the festivals do share some similarities such as the pole and the ham/handi on top of the pole and drenching each other in colors. However, it has far more differences such as the reason why each of them takes place, the time period and even what is thrown at each other.

Comparison between La Tomatina and Holi: