Difference between Law and Theory 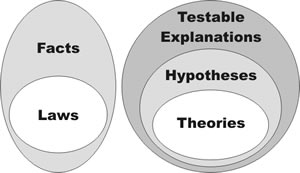 Law and theory are two terms that are often used in context of scientific terminology. A law mainly refers to a statement that is generally considered as fact by the scientific community. The reason as to why the law is true may not be known, however, the fact that it is, is evidently visible.

For example: Newton’s Law of Gravity, which states that all objects in the universe are attracted to each other, and hence are likely to pull each other towards themselves with a force, i.e. the gravitational force. The law is considered to be true and taken as a fact because it can be observed, i.e. everything thrown in the air falls back to the earth. The reason for this is not stated nor explained by the law. The law merely states that the object does fall to the earth every time. Hence, it must be true. 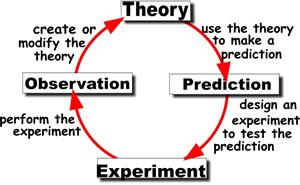 A scientific theory is essentially a type of explanation for the way things occur in the universe. It offers an explanation that is consistent with the scientific method, and it also fulfills the criteria required by modern science. It can also be said that theories are tested and proved hypotheses, which are confirmed through observation and experimentation.

A theory is only valid up until the time that there is evidence to disprove it. As soon as that evidence is found then, the theory is disproven and is no longer valid. A new theory would then be formed taking in consideration the new evidence on the matter.

The main difference between a law and a theory is that a theory tries to explain the reasoning behind something that occurs in nature, whereas scientific laws are just descriptive accounts of how something occurs in nature. Hence, laws are limited and can only be applied in certain instances. However, it is generally considered that laws are always true, whereas people are always trying to disprove theories.