Difference between Mnemonics and Acronyms

Key Difference: Acronyms mainly involve taking the first letter of each word in a name and making a word out of it. Simply said, it is an abbreviation. Mnemonics, on the other hand, are different. It is a type of memory device i.e. a technique that is used to remember things easily. 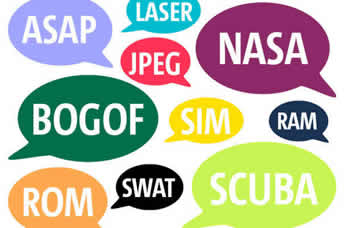 Mnemonics and Acronyms are two different techniques that are often utilized to make things easier to remember. However, the manner in which they are used differ. While the two things are often clubbed together, the reality is that they are two completely difference things.

Acronyms are easier, as they mainly involve taking the first letter of each word in a name and making a word out of it. Simply said, it is an abbreviation. For example: NATO is a type of acronym. It stands for North Atlantic Treaty Organization. Another is UN, which stands for United Nations.

An acronym is nothing more than a word that is form by using the letters of other words. Sometimes it can also use sounds of the first syllable rather than just the letter. For example: loran from long range navigation.

Mnemonics, on the other hand, are different. It is a type of memory device i.e. a technique that is used to remember things easily. The way a mnemonic device works is that it associates some information to another thing or object, which is by comparison easier to remember. Hence, when one recalls it, they automatically recall the information associated with it.

A common example of a mnemonic device is counting the months over the knuckles to see which month has 31 days and which don’t. Mnemonics are also commonly linked to music, as humans tend to remember music, which is why we have no problem remembering song lyrics. An example of this would be singing the ABCs, in fact many people can’t remember the ABCs until they sing them. Another example is the bone song which helps recall the names of the bones in the human body. 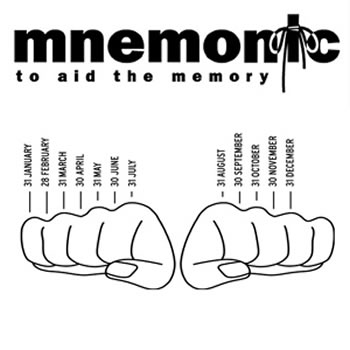 There are times when Mnemonics and Acronyms overlap, which is where the confusion arises from. It is easier to look at an example. The colors of the rainbow are Red, Orange, Yellow, Green, Blue, Indigo, and Violet. This is often written as an acronym, ROYGBIV. However, this acronym is often used a mnemonic device to remember the seven colors of the rainbow. In order to do this, it is often written as and pronounced as Roy-G-Biv. Alternatively, some people find it easier to recall a phrase rather than a made up word, hence they use, Richard Of York Gave Battle In Vain. Here, each letter of the first word, corresponds to the letter of the color of the rainbow.

Comparison between Mnemonics and Acronyms: