Difference between Mobile and Cell Phone

Key difference: The mobile phones are thus named because above all they are mobile. They can be carried anywhere and used anywhere. However, the mobile phones have another name, that is, the cell phones. The name cell phone is derived from the fact that these phones operate on cellular technology.

A mobile phone is a device that is or once was only used to make and receive calls. It does so over a radio link by connecting to a cellular network provided by a mobile phone operator. However, in today’s world, a mobile phone is used for much more than just making calls. These now commonly accepted and demanded features include text messaging (SMS), MMS, email, GPS, EDGE, GPRS, Bluetooth, Wi-Fi, radio, MP3, MP4, video recording, internet browsing, downloads, gaming and photography. Mobile phones offering all theses features and more are called smartphones.

The mobile phones are thus named because above all they are mobile. They can be carried anywhere and used anywhere. However, the mobile phones have another name, that is, the cell phones. The name cell phone is derived from the fact that these phones operate on cellular technology. Cellular technology denotes that the entire coverage area of a Base station is divided into many cells to implement frequency reuse.

While, a cell phone is the proper name for these devices, many people did not know the origin of the name, and most didn’t care. Since, the most popular feature of the device was its mobility, the term mobile phones got more popular and was easier to promote. Hence, the device is now commonly called a mobile phone in most parts of the world. The name cell phone is still commonly used in some parts of the world, especially in countries, where the cell phone was first commercially launched under this name, such as in North America.

The first hand-held mobile phone was demonstrated by John F. Mitchell and Dr Martin Cooper of Motorola in 1973. That handset weighed approximately 2.2 pounds (1 kg). The first mobile hand set that was used to make calls was available in Japan in 1979 by NTT. These worked in the metropolitan area of Tokyo.

All mobile phones or cell phones are similar and work on the same principle. The mobile can be GSM or CDMA. GSM require a SIM card to connect to a cellular network, while CDMA does not. While, mobile phones have a number of features in common, manufacturers do try to add additional features to their phones, in order to make them more attractive to consumers. This has led to great innovation in mobile phone development over the past 20 years. All cell phones have these common components: 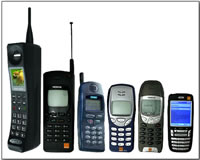 In 2011, global mobile phone subscriptions were at 6 billion, a huge increase from 12.4 million in 1990. The cell phone market had a penetration of up to 87% of the global population, a momentous number indeed.