Difference between Moonshiners and Bootleggers

Key Difference: Moonshiners are actually the people that produce moonshine or the liquor. Moonshine refers to any type of alcohol, most commonly illegal whiskey or rum. Bootleggers were smugglers that helped smuggle the moonshine for distribution. They were responsible for hiding and transporting the illegal alcohol.

The terms moonshine and bootleggers are often heard in old western movies, though many people don’t know what their origin is or what they actually mean. The term ‘moonshine’ actually refers to alcohol that was created in the dead of the night under the moonlight in secret. The term ‘bootlegger’ refers to the people that were responsible for transporting and distributing the illegal alcohol. 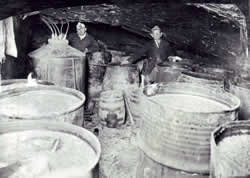 Moonshine dates back to the beginning of the American Revolution, when the government wanted to control the alcohol trade in the country. The story goes something like this; the War was starting to prove very expensive for the government and after exhausting all means revenues, they started levying federal taxes on liquors and spirits for additional funds. This did not sit well with the American citizens, as one of the main reasons for the war was to free themselves from the heavy taxes levied by the British Empire. Many Americans continued making alcohol (more commonly whiskey) in secret. Thus, moonshine was born. Moonshine has become obsolete these days because of the large distilleries offering alcohol at cheap prices.

Moonshiners are actually the people that produce moonshine or the liquor. The term is derived from the British term ‘moonshining’ referring to any job that was done late in the night. Moonshine refers to any type of alcohol, most commonly illegal whiskey or rum. The alcohol was distilled from rye, barley and more commonly corn. The whiskey and rum created from moonshining differed from the alcohol that was purchased in stores. The difference is that the liquors that are purchased from the stores are aged, while moonshine is fresh. Moonshine is also clear, while the modern liquors have a golden brown hue. This results from aging the liquor in wooden barrels. Moonshine also is much more powerful compared to the modern liquors and is also believed to pack a “kick” (referring to its sharp flavor). 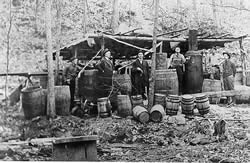 Bootleggers were smugglers that helped smuggle the moonshine for distribution. They were responsible for hiding and transporting the illegal alcohol. The origin of the term varies depending on the stories. One story describes that the term was formed from soldiers hiding bottles of moonshine inside their boots smuggle them into the army camps, while the other states that smugglers used to smuggle flasks of moonshine inside their tall boots to distribute them to others. The term then evolved to also include smugglers that used cars to transport illegal alcohol. The drivers would boost and enhance their cars to escape from the police and federal agents. Bootleggers are also known to give birth to Nascar driving, with the first drivers being bootleggers. Bootlegging did not become popular until the Prohibition was put into effect by the American government. The act passed forbid the manufacture, transportation and the sale of alcohol. Moonshiners and bootleggers flourished during this period by illegally providing alcohol and alcoholic beverages. The term ‘bootleg’ has evolved to also include other illegal activities such as bootleg recording and bootleg games. In this term it refers to pirated copies of music and games that are acquired from illegal means.

Moonshiners and bootleggers often worked together in the olden days. However, moonshining has been dying out slowly, while bootlegging is still active in many different forms.