Key difference: Mozzarella and Parmesan are both types of cheese which differ in their texture. Mozzarella is a soft cheese variant, while Parmesan is hard and has a very strong flavor. Cheese can easily be regarded as the rock star among all dairy products. Its followers and lovers have almost worshipped cheese by incorporating it into their many ethnic cuisines and delicacies. Commercially as well, cheese can be held no lesser than a nuclear warhead, for the sheer volume of its sale and the billions of profit that it’s made for its manufacturers and retailers. It can be said that cheese has emerged as a global money-spinner and the choicest ingredient of all food lovers.

Mozzarella and parmesan are two variants of cheese that are often considered alike, if not the same. The reasons for this confusion are justified as well. Both the types can be made from cow’s milk as well as buffalo's milk. Both are used interchangeably in a variety of delicacies. Both are high on nutritional content. Besides these, there are also other similarities between mozzarella and parmesan that compel a person to think that they’re the same, which they actually aren’t.

Mozzarella, as compared to parmesan, is a soft kind of cheese. It has a slightly spongy texture that isn’t an attribute of the parmesan cheese. Mozzarella essentially is of two types: fresh and aged. Made from cow’s milk, mozzarella is a cheese that does not need to age long in the storage room. The milk is kept in the storage area to form cheese curds and then withdrawn after attaining a desirable texture. For the preparation of aged mozzarella cheese, the milk is kept for longer periods in the storage area. 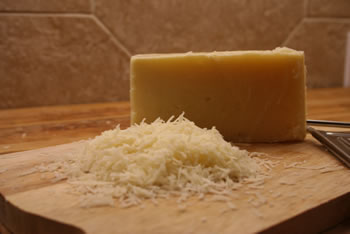 Parmesan is a hard kind of cheese. It has a very strong and distinct flavor to it. It isn’t exactly soft and chewy, which is why it is mostly used as a topping over a particular dish. Given that the parmesan cheese has a very strong flavor, even a small portion of it can lend a cheesy essence to any meal that it is added to. A notable thing about parmesan is that it was traditionally made from buffalo’s milk, which rendered it tougher than mozzarella. However, parmesan cheese is also made from cow’s milk these days.

Between both variants, mozzarella cheese is the preferred choice for any cheese-dependent delicacies such as a pizza. This is because the mozzarella is more chewy and soft as compared to parmesan, and melts easily in the oven as well. Therefore, both these varieties of cheese complement each other well, but they aren’t inter-replaceable for that matter.

Comparison between Mozzarella and Parmesan Cheese: