Key difference: As their name suggests, both mustard and mustard seed oils are obtained from the traditional mustard seeds. Though their name sounds similar, they have some distinctive differences between them.

Mustard oil and Mustard seed oil, sounds same and hence these oils are considered to be the same; it is true that they “are same”, but; the fact is “such is not the case”. Although their name sounds similar, they have some distinctive differences between them. Both oils can mainly be differentiated by their physical original appearances and components along with their usages in the different sectors of society and world. Mustard and mustard seed oil are considered to be the most consumed type of vegetable oils in the world oil market. 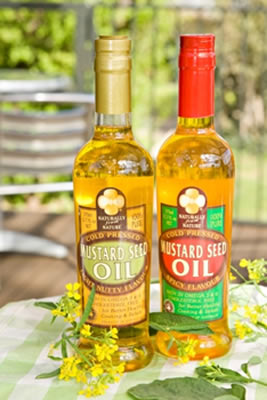 Mustard seed oils were considered to be allergic due to the high euricic acid content, which is also responsible for the strong albeit flavorful smell. This component in the oil was a part of debate as, the presence of euricic acid is considered to be harmful for human consumptions. Due to which the crude oil was banned and prohibited to use in some parts of the world. The European Union and Canada has recognized mustard seeds as major allergens. In the US, statistics is not available for mustard seed allergies. But, now after a long research and reinvention of the oil, it is considered to be healthful without having any allergic or harmful side effects. This may not be applicable to the one’s who are allergic or sensitive to mustard seeds. While, for the one’s who are not allergic can enjoy living with the seed oil, as the oil has more anti-bacterial and anti-infectious nature, which prevents the body from facing any infectious problems. 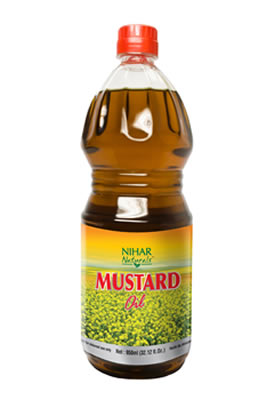 Mustard oil, extracted from mustard seeds, is a refined type of oil which is in filtrate form. Its one among the many cooking vegetable oils that are largely in used in the South Asian regions. The oil is a rich source of omegAlpha3 and omegAlpha6 fatty acids, vitamin E and antioxidant. It is considered as one of the healthiest oils. This refined oil is obtained after a long process of refinement, which enables the oil to be free from its original pungent odor and taste. The oil is refined by neutralization with an alkali or it can be physically refined by using a permitted food grade solvents, i.e. followed by bleaching with activated carbon and finally, deodorized with steam. This filtered oil is neutral in color and taste, and is widely used for cooking purposes.

The mustard oil contains 30 per cent protein, calcium and natural anti-oxidants. The oil is regarded to be "too beneficial" in health aspects, Reduces Risk of Cardiovascular Disease, Stimulates Digestion, Reduces Risk of Cancer, Antibacterial, Antifungal and Anti-inflammatory Action, Relieves Cold and Cough, Used for Massaging, Good for Skin and Hair and Relieves Joint Pain.

Mustard seeds and their derived oils are world famous for their uses and cooking applications. People often consider both these oils of same type and category due their name resemblances. Mustard seed oil is strong in smell as compared to the refined mustard oil. With respect to allergies and issues; mustard seed oil can be considered to be allergic, while filtered mustard oil is not allergic. In cooking, the refined mustard oil is more used more widely as compared to the only mustard seed oils. Both, oils share the same composition, differing in their constitution and amount with the absence of some components. And, both oils are health beneficial in their respective roles. They are known oils for lowering the cholesterol levels, and hence contributing in the reduction of heart or coronary diseases.

There exist three different types of mustard oils, depending upon their type of extraction;