Key Difference: NRI stands for non-resident Indian and thus NRI accounts are the accounts opened by the NRIs in India. NRI (Non -Resident External Rupee Account) and NRE (Non -Resident Ordinary Rupee Account) are types of NRI accounts. An NRE account can only be opened with the money that has been earned in abroad and not from any local rupee source, whereas an NRO account can be opened either by money earned abroad in foreign exchange or rupees earned from sources in India

If an NRI wants to open an account in India, then he may choose from various accounts like an NRE or an NRO account. Both are known as rupee account as the money in both the accounts is held in Indian rupees.  Apart from these, another account that exists for money to be held in Indian rupees is known as NRNR account. This account is a fixed deposit account that is maintained in rupees. 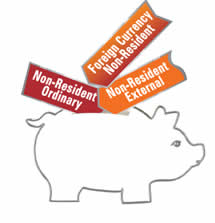 An NRE account stands for non-resident external account that is opened by depositing foreign currency at the time of opening the account in the bank. NRE accounts are selected by those NRIs who want to deposit their overseas earnings in India and in form of converted Indian rupees, whereas NRO is opted by those who want to retain the Indian based earnings in Rupees in India. The money in this account can be easily repatriated outside India and has no constraint on limit. This also does not require any approval from Reserve Bank of India. It means that rupee will be converted to the opted foreign currency at the current rate of exchange. Generally, operations in this account are only allowed by duly executed power of attorney or mandate for local payments. Transfers in foreign currency are only allowed in an NRE Account, and the amount in this account is able to be freely repatriated to India. On return of account holder to India, the account is re-designated as resident account.

An NRO amount gives the feasibility to the NRI to be opened either by money received from abroad in foreign exchange or from rupees that are earned in India. Bank automatically designates the local account into an NRO account for an Indian resident, who goes abroad for job or employment. An NRO account can also be opened by a person of Indian origin (PIO) and an overseas citizen of India (OCI). An NRO account or non-resident ordinary is like a normal bank account opened by an Indian who is going abroad with the intention of becoming an NRI. The principal amount in NRO saving account is completely tax free. However, the interest is charged with income tax. This is as per Double Taxation Avoidance Agreement that has been agreed between India and various countries.

These both accounts are categorized under NRI accounts that are denominated in Indian Rupees. Both these accounts have their own importance and characteristics. NRE accounts are fully repatriable and thus assist in making investments in India from foreign earnings. NRO accounts assist in holding earnings that NRIs earn in form of rents, dividends, pensions, etc, even when you are residing outside India. Both these accounts can be opened as saving and current amounts and the common thing is that they both are Indian Rupees accounts. Apart from NRE, NRO, NRNE the NRI accounts may also hold money in foreign currency. Foreign Currency accounts are mainly of types like FCNR accounts, Foreign Currency Accounts for Residents, RFC accounts, RFC (D) accounts, EFEC accounts, etc,. However, opening of accounts by individuals/entities of Bangladesh / Pakistan nationality needs the approval of the Reserve Bank.