Key difference: A Parachute and a Hot air balloon differ broadly from each-other. A parachute is meant for slowing down the speed while falling, whereas a hot air balloon is meant for floating by propelling and maintaining a high altitude with the help of a burning gas. 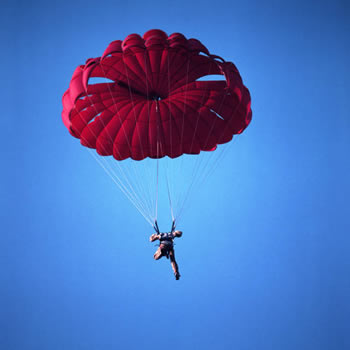 Parachutes have been used since from the end of the 18th century. The word 'parachute' has been derived from the French word para, meaning to protect against, and chute, meaning to fall. The first parachute was created in the year 1617 by Fauste Veranzio and a more developed one was built by Joseph and Jacques in 1783. The first man to use a parachute without a frame was Andrew Garnerin in 1797.

A parachute is a device used for slowing the motion of an object in the atmosphere by creating a drag. It basically acts as lifesavers for someone. It is a simple technology at work, but if it goes wrong, it could be detrimental. It is usually made out of light and strong cloth originally of silk. Today’s most parachutes are made up of nylon. Depending on the situations, they are used for carrying variety of loads, which includes people, food, equipment, space capsules and bombs.

A parachute works on a simple technique, which helps to break the fall by acting against the tug of gravity. In simple terms, a parachute employs the opposite energy to safely bring the objects and people down towards the ground. When a person using a parachute opens it, he/she creates a certain amount of resistance owing to the large surface area covered by the parachute's fabric. The expanded fabric drags, and traps the air on the inner side of the chute causing it to blow outwards. This causes the trapped air to balance the pressure created in the atmosphere. Due to the gravitational pull of the earth, the person wearing the parachute is pulled towards the earth but the pressure created due to the trapped molecules of air helps slow down their rate of fall. Hence when a parachute opens, it catches and entraps the air particles equivalent to the surface area, thus aiding a safe descend.

A parachute is extensively used to break the fall from an aircraft or higher altitudes. Owing to its large surface area, it aids to slow down the descent rate of the person or object thus resulting in a safe landing. It is also used for ejection from a burning fighter jet, in the military aircraft, for landing emergency goods; such as food and medications to the inaccessible areas like rainforests, deserts, oceans, and high altitude terrains.

The Hot Air Balloon was developed in the second half of the 18th century. The Montgolfier brothers - Joseph-Michel Montgolfier and Jacques-Etienne Montgolfier, are the inventors of the hot air balloon. It follows the principal of using gas with negative weights, such as hydrogen, to lift objects higher in the sky, which was developed by an Englishman Henry Cavendish in 1766. 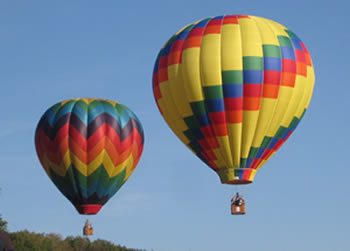 The hot air balloon is the oldest successful human-carrying flight technology and is a part of class aircraft known as balloon aircraft. It works on a very basic scientific principle, the rise of warmer air over the cooler air, as the hot air is lighter than the cooler air and has less mass per unit of volume.

A Hot Air Balloon comprises of a bag called as the envelope, which contains the heated air. Suspended beneath is a gondola or wicker basket (in some long-distance or high-altitude balloons, a capsule), which carries the passengers and a source of heat (heat is usually in the form of an open flame).

Hot-Air-Balloon is an aerostat, which works on the lifting force principal and consists of hot air produced by means of a propane burner. The modern hot air balloon, heats the air by burning the propane, (substance commonly used in outdoor cooking grills). The propane is stored in compressed liquid form, in the lightweight cylinders, which are positioned in the balloon basket. The intake hose runs down to the bottom of the cylinder, so that it can draw the liquid out. As the warm air rises, the hot-air-balloon rises upwards and traps the air inside its envelope. The top of the envelope has a large hole, which is sealed with a fabric valve. At the time the warm air is hotter than the air outside the envelope, it becomes less dense. It means that the air inside the balloon is lighter than that on the outside. In a Hot-Air-Balloon, as the heat is applied it keeps moving up in the air, and when the burning stops it comes down. Most hot air balloons use a wicker basket for the passenger compartment. Wicker works very well because it is sturdy, flexible and relatively lightweight.

Comparison between Parachute and Hot-Air-Balloon: