Difference between Parakeets and Lorikeets

Parakeets are small to medium sized and have a long tail feathers.  They can range in size from about 7” up to 18”. Parakeet families include various subspecies depending on different factors such as region, habitat, diet and appearance. The Budgerigar Parakeet, also known as "Budgie" or English Parakeet is the most common type of parakeet that is sold and bred world-wide. Male and female parakeets can be distinguished by the cere, a small strip color on their beaks; if the cere is brown or pinkish, it is a female, while bright blue suggests the bird is a male.

A parakeet has a long slender body, long tail feather, is available in bright colors and has a hooked bill. A small parrot can also be called a parakeet. Parakeets are native to Australia, Asia, tropical and sub-tropic regions of Africa, Central and South America, but they are now being breed all over the world. A parakeet’s diet consists primarily of seed and fruits. 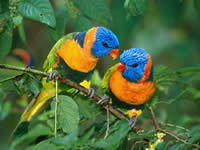 Lorikeets are small to medium-sized arboreal parrots, which fall into a different sub-species due to their specialized brush-tipped tongues. They can range from 6” to 16” in size and are also have a bright plumage. Lorikeet families have approximately 50 sub-species, of which some sub-species are endangered, such as the Ultramarine lorikeet and the Blue lorikeet. The sex of lorikeets is difficult to distinguish in many sub-species.

The specialized brush-tipped tongues are an important part of their diet that allows the birds to take nectar and pollen from flowers. The diet of parakeets includes pollen, nectar, fruits and vegetables. Lorikeets also have a hooked bill which is helpful for them to climb and hold things. Lorikeets are native to South-eastern Asia, Polynesia, Papua New Guinea, Timor Leste and Australia and can be most commonly found in rainforests, coastal bushes and woodland areas.

The main distinguishing feature between parakeets and lorikeets is the brush-tipped tongue of lorikeets and the massive difference in their diets. Lorikeets cannot survive on a seed based diet, while parakeets cannot survive on a nectar and pollen diet. Both the species are closely related to parrots and are intelligent and playful birds. Both the birds require ample amount of room to play in and attention. They can be taught to talk and make certain noises if trained properly. Lorikeets compared to parakeets are more expensive and require more attention. For more detailed differences, refer to the table below: