Difference between Pen and Pencil

Key difference: Pen and Pencil are common tools used in writing. The difference between the two is based on the different materials used in their making. 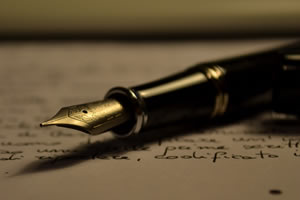 The origin of ‘pen’ dates back to 3000 B.C. Then around 500 B.C, the Ancient Indians invented the ‘ink’, and started using ‘feathers’  with a dipping nib, as a tool for writing. Historically, these pens were referred as reed pens, quills or dip pens, and were used to write on the sheets of papyrus. However, it was until 1945 A.D. when the ballpoint pen was invented, and become ready for public use.

Pens are generally made of plastic or metal, and consist of viscous oil or water based ink, which is delivered through the nib, a hard small rolling sphere. Based on their writing point or nib, pens are classified as ballpoint pens, fountain pens, markers and roller pens. Pens are cheap to buy, but the price does increase based on its material and ink quality. Generally, ballpoint pens are quite cheap and reliable, whereas fountain pens are quite costly. They are used for everyday writing, and are very reliable because the ink does not fade easily. Although, most of the written work is done on word processors, pens are still widely used by children and adults. 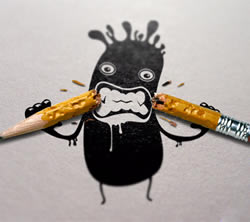 Pencil is another popular tool used for writing as well as drawing purposes. Though, the usable graphite wasn’t even discovered until 1565 in Cumbria, England. The rods of graphite were used to mark sheep, and in 1790 the wooden covering for the rods i.e. pencil was developed.

Pencils are made of wood, and have a graphite core inside; this core is sharpened and made pointy with a use of a sharpener, and is then used on write on a paper. The core leaves behind a very thin layer of solid graphite on the piece of paper or any other surface that it adheres upon; pencils, which are made of graphite, leave behind a dark grey or black impression on the paper. Though, color pencils are also used for artistic purposes. To make the pencil more useful, an eraser was attached to the end, so that any mistake made can be easily corrected. Pencil is mainly used by students in their formative years of learning to improve their penmanship, and later graduate to pens when they are mature enough to handle ink pens.

Comparison between Pen and Pencil: