Difference between Plot and Story

Key Difference:  A story is basically a sequence of events in words based on some true or fictitious incidents. On the other hand, a plot establishes the relationship between the events of a story by using an element of cause and effect. The same story may be interpreted by using different plots. 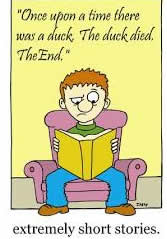 Many people have described plot and story in different ways. However, there seem to be many different notions attached with the concept of plot and story. A story is basically a sequence of events in words based on some true or fictitious incidents. There are different mediums to express a story like in prose or verse. The story can also be depicted by various mediums like films, books, theater, plays, etc.

Stories have been an important part of various cultures and societies mainly for their entertaining effect.  A story can be short or lengthy depending upon many factors. The story must possess some events otherwise it will not be called as a story. A story always tells the events in chronological order. Four important element of a story are – setting, characters, plot and conflict. Setting is all about the background information regarding the time and place where the story is taking its shape. Characters are all creatures involved in the story. Plot is the series of events described in a logical way. Conflict deals with a problem or conflict between people, things or even ideas.

Plot is associated with the stories as it weaves the story into events. These events transcend from one to another. A plot describes what happens in the order and clarifies the transcending of one event into some other particular event. Therefore, it is also considered as a part of discourse. Every story tends to have a similar type of structure. However, they can be segmented into sections like set up, inciting incident or conflict, rising action, climax, falling action and resolution to make up a plot. 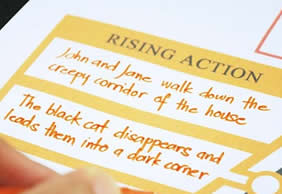 During the first stage of a conventional plot’s frame, main characters are introduced and background information is provided. It is followed by the conflict where a problem or struggle occurs. Rising action increases the tension and leads to the climax. During climax, the plot reaches to its highest emotional platform. It is the main turning point. Falling action is related to some events which arise due to crisis. The tension begins to settle down.  Resolution is generally the final element where the conflict meets its resolution and usually ends with a happy ending.

Novelist E.M.Forster defines story as the chronological sequence of events and plot as the causal and logical structure which connects events.

Story depicts the events but in sequence. However, a plot is more interested in answering that how this sequence took place.

Foster uses an example to make the idea understandable –

Story - The king died and then the queen died

Plot - The king died and then the queen died of grief

Therefore, a single story can be developed in various ways in context to variation in plot. Plot explains the chronological sequence of a story by using cause-and-effect feature.

Comparison between Plot and Story: