Difference between Pupil and Student

Key Difference: Pupil and student are considered synonymous as both denote a person that is taught by a teacher. However, student is generally associated with a person who is taking a formal education by being enrolled in a school or in a college and pupil is generally associated with a young student or a young learner. They quite vary in the context to usage. In some countries, pupil word is used for a young student, whereas in some countries pupil is used for a learner, who is being taught by a personal tutor or an instructor.

Pupil and student, these two words often create confusion. Confusion sees to be obvious as both the terms have little variations in their usage, in various countries. However, we can state that generally a student is one that is formally engaged in the education, whereas pupil can be referred to any learner, being taught by a teacher or an instructor.

The word pupil is originally a Latin term that was used to denote minor as the ward of an adult guardian. A student refers to a learner, but it specifically denotes one that is enrolled in a school or a college.

In other words, we can say that a student is formally engaged in the process of learning. Schools and colleges are educational institutions that are engaged in providing formal education to the students. However, in many countries the word student is reserved for higher education or University, and pupil is used for primary and middle level school students.

Pupil is generally used for a young person who is taught by another person, especially 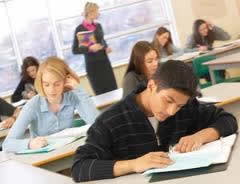 by a teacher. The word is supposed to be derived from Old French estudient "one who is studying," from Medieval Latin studiare "to study". According to this definition, a student of XYZ School can be termed as a pupil, similarly John, who takes private tuitions from Harry sir, also falls in the category of pupils. Anyone who is taught or guided by a teacher can be considered as a pupil.

However, it is important that the usage of these terms can vary from one country to another. Pupil is used in context to British primary and secondary schools, whereas student is used in reference to British higher education schools and colleges.

Thus, we can say that there is not much difference between the two; it is just the preference in which they are used. ‘Pupil’ is generally preferred for young students and similarly student is preferred more for a learner, learning formally in a school or college, rather than leaning from a private tutor.