Difference between Sake and Soju 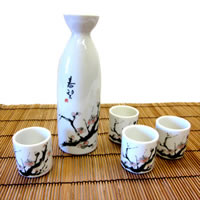 In Japan, sake is a generalized term referring to any and all alcoholic beverages. What English speaking countries refer to as sake, is in fact termed nihonshu in Japanese. The probable origin of sake was between 710A.D. to 794 A.D.

Even though, sake is called rice wine, the actual process of producing sake is similar to beer. Sake, like beer, is produced by means of a brewing process in which the sugar needed to produce alcohol must first be converted from starch. The brewing process differs for sake in the manner that the conversion from starch to sugar and in turn from sugar to alcohol occurs simultaneously.

True sake is made from rice, water, and kōji mold, i.e. Aspergillus oryzae. Once, sake was the dominant alcoholic beverage in Japan. It was commonly used for religious ceremonies, court festivals, and drinking games. However, due to globalization, beer, wine, and other western spirits were introduced into Japan, especially after World War II. In the 1960s beer consumption surpassed sake and the production of sake has been declining since the mid 1970s. In 2007, the number of breweries in Japan amounted to 1,845, down from 3,229 breweries in fiscal 1975. Still, there has been an increased interest in sake, especially from the western countries. Hence, a number of breweries have popped up in China, Southeast Asia, South America, North America, and Australia.

Undiluted sake contains 18%–20% alcohol by volume (ABV), higher than the ABV of wine (9%–16%) or beer (3%–9%). However, the ABV of sake is often reduced to 15% by diluting it with water prior to bottling. The ABV of soju, on the other hand, ranges from 16.7%, to about 45%. Soju with 20% is the most common. Alcoholic beverages with an ABV below 25% are considered light alcoholic beverages, while beverages with an ABV above 25% are considered hard liquor.

Soju is a type of distilled beverage which originated in Korea. Soju is a drink similar to vodka. However, it is often considered to have a taste sweeter than vodka due to the sugars added in the manufacturing process. Like vodka, it is often drunk neat, and sometimes as a cocktail. Soju is often mistaken for Chinese baijiu, and/or Japanese shōchū.

Most brands of soju are made in South Korea. They are traditionally made from rice; however modern producers often use potatoes, wheat, barley, sweet potatoes, or tapioca instead of rice.

Soju is clear and colorless and is widely consumed in Korea, mainly due to its low price. Beer, whiskey, and wine have gained popularity in recent years mainly due to westernization of culture. Still, soju remains one of the most popular alcoholic beverages in Korea. This is mainly due to its ready availability and relatively low price. In 2004, it is estimated that more than 3 billion bottles of soju were consumed in South Korea.