Difference between Snowboarding and Skiing

Key difference: Snowboarding is a winter sport where the participants ride their snowboards over snow-capped slopes. Skiing is a leisure and competitive activity, which the participants perform by attaching skis to their shoes and moving atop snow.

Snowboarding, as the name suggests, means to board a snowboard and riding down a snow hill or a snow covered slope. The participant who undertakes snowboarding is called as a snowboarder.Snowboarding came into existence in the 1960’s. It later went on to be included as a Winter Olympic Sport in the year 1998. Originating in the United States, snowboarding borrows its board design from summer sports such as skateboarding and surfing. In order to snowboard, all that one requires is a pair of customized snowboarding shoes and a snowboard.

There are many styles of snowboarding, among which, the alpine, freestyle, and the boarder cross are prominent. Snowboarding is all about balance. Boarders have to ensure that their feet are pinned down to the board all the while for optimal balance, either by assuming a high-back posture, or through a pair of non-release plate bindings. The technique of riding a snowboard is at a parallel with that of skateboarding. Here too, the boarders are required to shift their weight from their heels to toes, so as to maneuver the snowboard. For braking, the boarders have to dig their heels or toes into the snow, so that the snow board comes to a halt gradually. 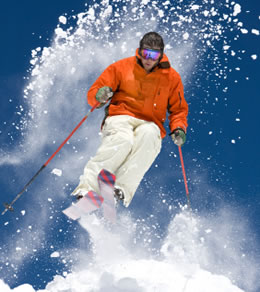 Skiing is performed by attaching a pair of skis to one's feet through plate bindings, and sliding over snow surfaces with a side to side treading motion. Skiing is derived from the word ‘ski’, which means a split piece of wood or firewood in Old Norse language.  Skiing is not only a competitive sport, but also a recreational activity. In fact, skiing has been in use for military purposes and for traveling in regions that are densely snow clad. This was the case until the year 1860, after which skiing was recognized as an exercise and a competition.

Skiing usually entails two types: Alpine and Nordic. Alpine skiing originated in the European Alps, thus the name Alpine. This type of skiing is done at a ski resort or a dry slope, by attaching fixed heel bindings to the heels and toes of the skier’s shoes. Conversely, Nordic skiing originated in Scandinavia, and is practiced by attaching free-heel bindings to the skier’s shoes. These bindings grab at the toes of the skier, but not his/her heels. Unlike snowboarding, where the participant shifts his weight up and down the board for movement, skiing involves shifting the participant’s weight from one side to another.

Comparison between Snowboarding and Skiing: