Difference between Sorting and Collating

Key Difference: Sorting means ordering or categorizing something. On the other hand, Collating is to assemble something in a logical sequence.

Sorting and collating are often used interchangeably, but they are slightly different from each other.

a)      Any of the individual characters making up a font of type.

b)      Characters of a particular font that are rarely used.

Sorting refers to the process of putting a set of documents or data in a specified order. Sorting, in turn, is needed to allow other kinds of processing to occur. It is most commonly used in ordering and categorizing. Ordering is to arrange things of the same kind, class, nature, etc., whereas, categorizing is to label things and group together things with similar properties.

Sorting is most importantly used in computer science because there are thousands or millions of subjects which has to be recorded. Examples like playing cards, algorithms, etc. Searching sorted data is much more efficient than searching randomly-ordered data. Sorting colors, buttons, etc. are also some of the examples of sorting.

Some examples of sorting in a sentence are given below: 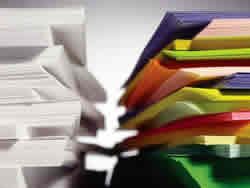 Collating is to assemble multiple copies of printed documents into sequences of individual page order. It is like one sequence for each copy and is especially done before binding. It also refers to the process of comparing two strings to determine which is greater, or if they are equal. Collating is a fundamental element of most office files, library catalogs and reference books.

A collation is also known as a collating sequence. It is a database object containing a set of rules that determines how character strings are compared, searched and alphabetically sorted. Strings basically represent a number that may be sorted based on the values of the numbers. The rules in the collation determine whether one character string is less than, equal to or greater than another. A collation also determines how case-sensitivity and accents are handled.

Some examples of collating in a sentence are given below:

Thus, sorting is to ARRANGE according to class or size, whereas, collating is to ASSEMBLE in proper numerical or logical sequence.