Difference between Water Vapor and Steam

Key Difference: Water vapor is when water molecules are present in the air, while steam is water heated to the point that it turns into gas. In simplified science, both are referred to as the gaseous state of water. Steam is usually white or translucent in nature, while water vapor can be clear or translucent. Steam is believed to be basically water vapor at a higher temperature.

In simplified science, both are referred to as the gaseous state of water. There is technically no difference between the two term. However, when used colloquially, there is a slight difference between the usage of the two terms. The main difference lies in temperature. Water vapor is when little water droplets, i.e. water molecules,  exist in the air. These water droplets could be invisible to the eye, but they are there. Steam, on the other hand, is when water is heated to the point that it turns into gas. Hence, it can be said said that steam is the gaseous form of water.

Now, let’s try and explain this using an example. When a person leaves their clothes to air dry, the water from the clothes evaporates slowly as the temperature around the cloth changes. This is evaporation, which leads to water vapor. The water becomes absorbed in the air which leaves the clothes dry. Now, when we put a kettle of water to boil, after a moment we see the water lessening and a few wisps of white escaping the kettle. This is steam. Steam is usually white or translucent in nature, while water vapor can be clear or translucent. 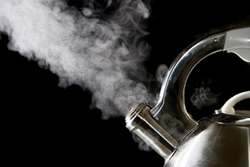 Water vapor is ever present, whether one can see it or not. Water vapor is basically air with the presence of water molecules, and as water molecules are always present in air, so it water vapor. Steam is believed to be basically water vapor at a higher temperature which also causes it to be seen. In water vapor, there is still water droplets that are present, which can be further cooled down to turn back into water. In steam, water converts purely into gas. Water vapor does not require heating or adding the element of heat, water vapor can form by evaporation or the temperature around the water. However, in order to have steam, water is required to be boiled at a certain temperature (above boiling temperature of water) to form steam.

If you search water vapor vs. steam, it will result in confusing terms as many websites claim that there is no difference between water vapor and steam, while others claim that water vapor and steam are really different. However, they do go hand-in-hand as they are both properties of water. In order to simply, let’s think of it in this way. When the ice melts at room temperature, it forms condensation on the glass and has if you place a plate or a flat surface on top of the glass or bowl of ice, you would see there are visible water droplets on the top of that plate or surface. This is basically water vapor, which requires water droplets to be in the air. Now, if you heat up a kettle of water, the hot white air that is released out of the kettle is steam, which also has tiny water droplets but much of it escapes in the air.

Comparison between Water Vapor and Steam:

Steam is not what you see in a hot shower. That is condensation and water vapor. Steam is simply water vapor heater to boiling. Steam has energy in it and can perform work, such as a steam engine, aircraft carrier catapult, or steam locomotive. Water vapor has basically no energy, and hence cannot perform work. Steam has to be contained under pressure to work, but once work is performed and cooled below boiling, it returns into the air as vapor.

This website has just confused the heck out of me. Steam and water vapor are synonyms! They are the same thing.

Water vapor is little water droplets that exist in the air.

This is simply flat-out wrong. Water vapor is completely gaseous, as well as invisible.

A Vaoour (water or otherwise) is the gaseous state in the presence of liquid. Thus when compressed a vapour condenses to produce more liquid with the pressure dependent only on the temperature not the volume. Steam, as described is totally gaseous and obeys the gas laws (PV=nRT) closely.

You never expected a pond, or a sea, or a lake to start boiling did you? :P ) Conclusion: Vapour is a mixture of steam and minute water droplets or simply water molecules which escaped the liquid phase due to evaporation whereas steam is the pure gaseous state of water. If steam and water vapour are the same thing there would be no water cycle as there is not enough energy in the sun even in the middle east to heat the oceans above 37 degrees. At 1 atmospheres water boils away at 100 c. Evaporation can happen in any temperature of water. Hence why humans sweat. There would be no point if we had to reach 100 c for the sweat to heat up enough to evaporate because the enzymes in our body would stop working and we would die. So please before you post silly answers like that u must really start to understand the basics of thermodynamics

thanks! a lots much, what iconfused before this intersting notes.