Difference between White and Purple Eggplant

Key difference: White eggplants tend to be smaller and more firmly textured. They are considered to be denser, creamier, milder, less acidic and less bitter, and to have more seeds. Purple eggplants have glossy, purple skins, and are oval and oblong in shape, and tend to be wider at the end. 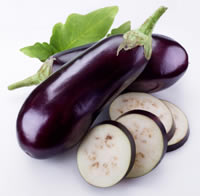 The eggplant, like tomatoes, peppers, potatoes and sweet potatoes, belongs to the nightshade family and thus is technically a fruit. Eggplant is officially categorized as a berry. The eggplant is native to the Indian Subcontinent and has a number of varieties, of which the large dark purple pear shaped eggplant is the most common. The eggplant got its name, as the first observed eggplant were small, round, egg-shaped and white. Other names for eggplant include aubergine, melongene, brinjal or guinea squash.

The eggplant is fleshy, has a meaty texture, and contains numerous small, soft seeds. It generally has a pleasantly bitter taste and spongy texture, which becomes tender with a rich, complex flavor after cooking. The eggplant has a bitter taste as it is a close relative of the tobacco plant, and like tobacco contains nicotinoid alkaloids.  However, the amount of nicotine consumed by eating eggplant is negligible. Actually, nine kilograms (20 lbs) of eggplant contain the same amount of nicotine as a cigarette.

There are many varieties of eggplants. The different varieties are classified by their different size, shape, and color. Most of them are typically purple in color, but the color of some varieties can vary from white, yellow, orange, green, lavender, purple, reddish-purple and dark purple. Some have a color gradient, from white at the stem to bright pink to deep purple or even black. There are even some that have green or purple striping. The standard eggplant is the Italian or Mediterranean eggplant which is a teardrop-shaped or pear-shaped purple eggplant. There are also the Japanese eggplants: long, slender and lavender, Chinese eggplants – similar to Japanese eggplants Thai and Indian eggplants: which are available in shades of green, purple, striated green and white, and are the size of cherries. 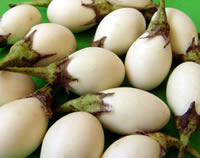 As compared to the more common purple, white eggplants tend to be smaller and more firmly textured. They are considered to be denser, creamier, milder, less acidic and less bitter, and to have more seeds. The skin of a white eggplant is tougher than purple eggplant which needs to be peeled off before cooking. However, this also makes is better suited for baking, steaming or frying as they hold their shape better. The flesh of the white eggplants is white. They are also low in calories and contain traces of several nutrients such as potassium, vitamin A, vitamin B-complex and vitamin C. They are also only available seasonally. White eggplants are gaining in popularity, as they are now being considered as trendy to use. However, they are no where as close to popular as purple eggplants.

Egg Plant varies in Pakistan and India but America