Difference between Yoga and Pilates

Key difference: Yoga is a form of exercise and meditation. It is most commonly practiced in India and is known for disciplining physical, mental, and spiritual forms. Pilates is essentially a body conditioning routine. It focuses on building flexibility, improving muscle strength and on increasing endurance in the legs, abdominals, arms, hips, and back. 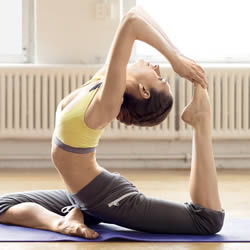 Yoga is a form of exercise and meditation. It is most commonly practiced in India and is known for disciplining physical, mental, and spiritual forms. It is based on the Yoga Sūtras of Patañjali. Various traditions of yoga are found in Hinduism, Buddhism, Jainism and Sikhism. Early forms of meditative yoga have been dated back to the Indus River Valley in the 3rd millennium BC, when seals depicting figures in a common yoga and meditation pose were unearthed. Modern yoga became popular during the mid-19th century and was introduced by Swami Vivekananda, who toured Europe and the United States in the 1890s. The most common yoga practiced in the Western countries is the Hatha yoga and its asanas.

Yoga is most commonly associated with meditation and the ‘prana’ or ‘life’. It seeks to balance and relax the body, including joining the breath with the spirit. It is also used in order to improve a person’s flexibility and build up strength. The teachings of Yoga are grouped into three parts: the physical aspect, mental aspect and spiritual aspect. While the physical aspect focuses on strengthening the body, the mental aspect deals with relieving stress and anxiety, along with fostering positive thinking and self-acceptance. The spiritual aspect deals with becoming one with the nature and the joining of the body and spirit as one. Different asanas of yoga are used depending on a person’s need. Yoga can be used for meditation, increasing flexibility, or burning calories. Yoga can also help fight cancer, schizophrenia, asthma and heart diseases; it also increases awareness, improves musculo-skeletal and mental health. It can also relieve stress, anxiety, depression and promote more happy thoughts. One should also be careful when performing the asanas, so that they do not over-exert themselves and cause injuries. 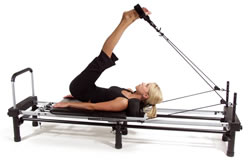 As compared to Yoga, Pilates is a fairly new form of a physical fitness system. Pilates was developed by Joseph Hubertus Pilates. Joseph Pilates was a sickly child and suffered from asthma, rickets, and rheumatic fever. Due to this, he began studying body-building, yoga, kung fu, and gymnastics, in order to improve his health and endurance. He eventually went on to develop his own style and technique of training, influenced by the techniques he has studied.

Joseph Pilates originally called his technique, "Contrology." Contrology encouraged the use of mind to control muscles. It focused on developing core postural muscles that help keep the human body balanced and provide support for the spine. Eventually, Contrology was renamed Pilates, in honor of its creator.

Pilates is essentially a body conditioning routine. It focuses on building flexibility, improving muscle strength and on increasing endurance in the legs, abdominals, arms, hips, and back. The techniques put an emphasis on spinal and pelvic alignment, breathing, and developing a strong core or center, and improving coordination and balance. Additionally, Pilates improves muscle tone, balances musculature, supports correct posture, and teaches to move with ease and grace. Pilates also helps improve balance, lumbar stabilization and flexibility. It also aids with lower back pain and pelvic floor dysfunction.

Pilates has various levels from beginner to advanced. It is mostly thought in classes by an instructor, who aims to show the students the correct techniques and postures. It can be done with the support of various machines and equipment. However, a number of routines have come up that can be done with only an exercise mat.

A comparison between Yoga and Pilates: