Key Difference: There are different types of fire extinguishers such as water based, powder based, CO2, Foam, Wet Chemical, etc. Extinguishers should be used depending on the type of fire. 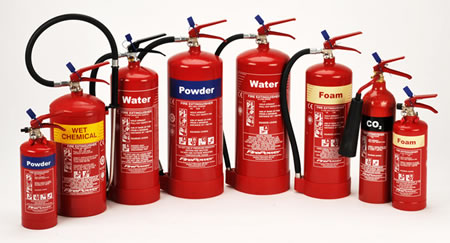 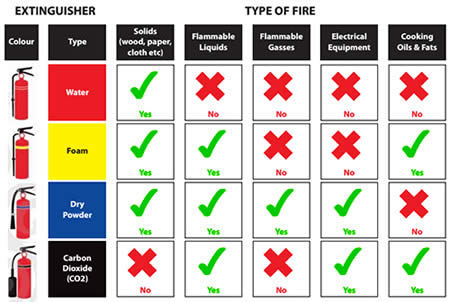 Water Extinguisher: This extinguisher includes nothing but water which is sprayed on to the fire. This is classified in Signal Red, which means it can be used on Class A such as wood, paper, fabric, and most kinds of trash. It works by cooling the surfaces and reduces spreading the fire to surrounding areas and to douse the fire.

Water Spray Extinguisher: These extinguishers come with an additive that helps douse the fire faster. This extinguisher also works on Class A fires and should not be used with any fires with electrical appliances or oil based fires.

Water Mist Extinguisher: This extinguisher comes with a red writing on a white label and is a dry water mist extinguisher which means it is something like water but not exactly like water. Hence, it works for all of the classes mentioned above, even the electrical fires as the mist is non-conducive. This is the most common type of extinguisher that can be found in almost all buildings.

Powder Extinguisher: This extinguisher works on Classes A, B, C and E. It contains a powder formula that acts as a thermal ballast reducing the temperature of the flames to ensure that it is too cool for the chemical reactions to continue. This extinguisher works well with fires involving organic solids, liquids such as grease, fats, oil, paint, petrol, etc. but not on chip or fat pan fires.

Dry Powder Extinguisher: While, the previous ones do not work on combustible materials and minerals, this extinguisher was designed to tackle fires involving combustible metals such as lithium, magnesium, sodium or aluminum when in the form of swarf or powder. The label has a blue sticker.

Foam Extinguisher: This extinguisher has a cream background and is designed to work on fires of Classes A, B, and C. The foam extinguishes fires involving solids and burning liquids, such as paint and petrol but not suitable for chip or fat pan fires. It can also work on Class C/E.

Carbon Dioxide Extinguisher: It has a black label with Carbon Dioxide that is written on it. This extinguisher works with Class C/E and douses fires started by electrical equipment. It is most commonly used in computer server rooms. Ensure that other people are out of the room when used as the CO2 can asphyxiate people present in the room.

Wet Chemical: This extinguisher is designed specifically to work on fires of Class F or fires that arise from cooking oils and fats. It comes with a potassium acetate that helps douse the fire and ensure that the fire does not exceed the pan. It comes with a canary yellow label.

Fire Blanket: These blankets are made of the same resistant material that the fireman suits are made of. It is used to douse fires by trying to put the fire out using the blanket to cover the fire. However, it was originally designed to cover people whose clothing is on fire. It can be used to put out fires that involve both solids and liquids.

Fire Buckets: These are similar to old fashioned fire buckets are can now be found in certain places where keeping access to fire extinguishers is hard. The bucket can be filled with sand or can be used to pour water on the fire. This bucket works best with Class A fire.