Difference between Barley and Wheat

Barley and wheat are two common types of grains that are part of the grass family. These are a common part of our daily diet. Due to their similarities in nature and appearance, they are often confused as the other but are very different from each other. Both of them are essential foods for carbohydrates and most importantly fiber that is necessary for digestive health. See the difference Soluble fiber Vs. Insolube Fiber.

Barley, belonging to the Hordeum genus of the Plantae kingdom is a member of the grass family and is considered as a cereal grain. The term ‘barley’ is derived from the Old English word ‘bære’, which can be traced back to Proto-Indo-European, similar to the Latin word for flour. Barley was one of the first domesticated grains in the Fertile Crescent, northeast Africa. It appeared around the same time as einkorn and emmer wheat. Barley is a self-pollinating, diploid species with 14 chromosomes.

Wild barley has a brittle spike, which upon maturity separate and gives off seeds. The domesticated barley, most commonly used in today’s world, has non-shattering spikes, which are much easier to harvest when matured. There are different types of barley: Two-row barley, six-row barley, and hulled barley. In two-row barley, there are actually three spikelets, which are arranged in triplets alternating along the rachis. The center spikelet is the only one that is fertilized, while the other two are reduced. In six-row barleys, a pair of mutations result in fertile lateral spikelets. The two-row barley has a lower protein content compared to six-row barley, thus more fermentable sugar content. The third type of barley, known as hulless barley is a form of domesticated barley which makes it easier to remove the hull.

Barley has various different uses including bread, cereal, animal fodder, for fermenting beer and other distilled beverages, soups, stews, bread and algicide. The most common usage of barley is in beer and malt, where it is used as fermentation material in these beverages. Barley is considered to be high in carbohydrates, fat, protein, dietary fiber, vitamin B, vitamin C, calcium, iron, magnesium, phosphorus, potassium, zinc, folate, riboflavin, etc.  Since it also contains good fat and low bad fat, it is considered to be a good dieting food in order to lose weight.

Barley is also associated with many health benefits; the fiber in barley reduces the risk of coronary heart disease and can lower cholesterol. Barley can also reduce the risk of Type 2 diabetes and colon cancer. It also has fewer calories and is a great dieting food. 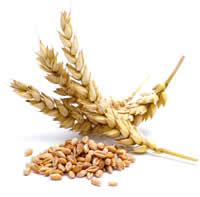 Wheat, belonging to the Triticum genus, under the Plantae kingdom is also a member of the grass family and is considered as a cereal grain. Wheat is also one of the first cereals that have been domesticated along with barley. It was also easy to domesticate because of its ability to self-pollinate. Wheat originates from the Levant region of the Near East and Ethiopian Highlands.

Difference between Barley and Wheat:

Also see: The difference between oats and wheat