Difference between Certificate and Diploma

Key difference: A diploma is a document, which is issued by an educational institution, such as a college or a university. It denotes that the recipient has successfully completed a course of study. However, a certificate is a document that denotes some fact or accreditation, or it can be used to prove that something being stated in the certificate is true. 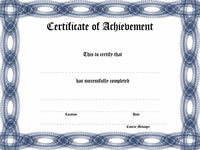 Certificate and diploma are commonly used terms when discussing accreditation. So much so, that their definitions have blurred and merged together. However, the two have distinct functions, and denote something completely different.

According to Dictionary.com, a diploma is “a document given by an educational institution conferring a degree on a person or certifying that the person has satisfactorily completed a course of study.” It can also be a document conferring some honor, privilege, or power.”

A certificate, on the other hand, has a broader scope. Dictionary.com defines certificate as “a document serving as evidence or as written testimony, as of status, qualifications, privileges, or the truth of something.” Or it can also be “a document attesting to the fact that a person has completed an educational course, issued either by an institution not authorized to grant diplomas, or to a student not qualifying for a diploma.”

A certificate confirms certain facts about an object, person, or organization. The confirmation is however not always provided by some form of external review, education, assessment, or audit. A common type of certificate is a professional certification. This denotes that the person is certified as being able to competently complete a job or task. This assessment may be done by the passing of an examination on the recipient’s part. This is why courses such as Adobe Photoshop or C++ Programming provide a certificate at the end; to denote that the recipient is certified to work with Adobe Photoshop or is certified to do programming in C++.

Certificate are usually either valid for a lifetime to the recipient may have to be recertified again after a certain period of time. For example: If a person is a certified welder, then he can weld for all of his life. However, in case of a computer program certification, such as Adobe Photoshop, with a newer version of the program, some or most of the recipient’s skills may be outdated. He may then have to get recertified on the newer version of the program. 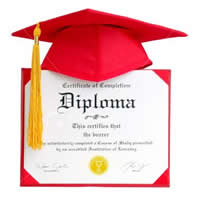 Earning a certificate, usually takes a few weeks or months at most. However, earning a diploma, usually takes longer, such as a few months to a year or two. This is still often less then earning a degree. A diploma refers to the completion of a particular course of study, as oppose to just a skill or specific knowledge denoted by a certificate. In some countries, such as the United Kingdom and Australia, diplomas refer to a level of academic award. A Nobel laureate receives a diploma with his Nobel Prize.

In terms of education, a diploma is often given for vocational and professional courses such as pharmacy, designing, journalism, etc. It is often offered by professional and vocational schools, high schools, trade schools, community colleges, or colleges who cannot or are not ale to offer degrees. A diploma is a basic level educational qualification. It could be used as an entry into the field and can be used as a stepping stop to either advance in the field or to receive a diploma is a basic level educational qualification.