Difference between Fleas and Ticks

Key difference: Fleas are tiny, wingless, parasitic insects that live and feed on blood from humans, dog, cats, and other animals. They are agile, usually dark colored with tube-like mouth-parts adapted to feeding on the blood of their hosts. Ticks, on the other hand, are tiny, wingless, ectoparasites that belong to the Arachnida class, the same class that spiders belong to. There are various different types of ticks such as the American deer tick, sheep tick, and cattle tick.

Both fleas and ticks are parasitic infestation that can often trouble humans: adults and children, as well as animals. Parasites are highly specialized in their nature and are very adaptive to their surroundings, their hosts and their hosts’ mode of life.

Fleas are tiny, wingless, parasitic insects that live and feed on blood from humans, dog, cats, and other animals. They are agile, usually dark colored with tube-like mouth-parts adapted to feeding on the blood of their hosts. Their legs are long, the hind pair well adapted for jumping: a flea can jump vertically up to 7 inches (18 cm) and horizontally up to 13 inches (33 cm). Fleas generally have a reddish brown flat body shape.

Also, the fleas leave a series of bites when they feed. The bites generally result in the formation of a slightly raised, swollen itching spot with a single puncture point at the center, which is similar to a mosquito bite. The bites often appear in clusters or lines of two bites, and can remain itchy and inflamed for up to several weeks.

Ticks, on the other hand, are tiny, wingless, ectoparasites that belong to the Arachnida class, the same class that spiders belong to. There are various different types of ticks such as the American deer tick, sheep tick, and cattle tick. Ticks can be classified into three families: Ixodidae (hard ticks), Argasidae (soft ticks) and Nuttalliellidae. The hard ticks often have a small hard shell on the back of their mouths. They are often found all over the world, commonly in warm, wooded and humid conditions. Ticks require a certain amount of moisture in the air for metamorphosis. Ticks do not spend their whole lives on one host and depend on a variety of hosts from a variety of species for nutrition.

Ticks are divided into two primary sections: the anterior capitulum and the posterior idiosoma. The anterior capitulum contains the head and mouth of the ticks, while the posterior idiosoma contains the legs, stomach and reproductive organs. Like all arachnids, ticks have eight legs. They have a two year life cycle, during which they can infect up to three hosts. In order to attach to a host, the ticks climb to the ends of leaves, plants and shrubs and wait for the host to pass by them. They then attach themselves to the host and find an appropriate place to feed, which include traveling all over the body. They also like shaded areas such as the ears, hair, the inside of the arms, etc. After the ticks are full, they drop from the human and hide until they require another feeding for metamorphosis. 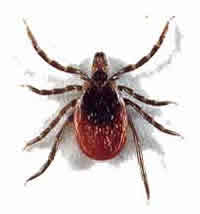 The main difference between fleas and ticks is that fleas are insects, while ticks are arachnids like spiders. However, both feed on the blood of humans and animals. Ticks usually attack individually and especially outside, whereas fleas usually lead to an infestation that can spread all over the home and/or yard. The following table depicts a detailed comparison between fleas and ticks.