Difference between Irrational and Real numbers 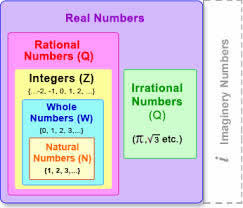 Real numbers define a set of values which lie between positive and negative infinity. They are used to represent various types of continuous physical quantities like distance, time and temperature. Real numbers consist of all the rational as well as irrational numbers. The system of real numbers can be further divided into many subsets:

Real numbers represent a quantity along a continuous line known as the Number Line. The numbers stand in one-to-one correspondence with the continuous points on the number line. They consist of whole (0, 1 ,3 ,9, 26), rational (6/9, 78.98) and irrational numbers (square root of 3, pi). Infinity does not fall in the category of real numbers. Square root of -1 is also not a real number, and therefore it is referred to as an imaginary number. A real number can be represented as a possibly infinitely long and non repeating decimal.

Comparison between Irrational and Real Number: